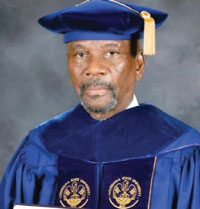 The milestone was historic as he became the eldest student to receive a graduate degree during a fall commencement at the school and the oldest Black person to ever receive a LSU degree. When he was 18-years-old, Jones joined the Marine Corps. While deployed in Vietnam he decided that he wanted to get back on track with his education. He noticed that individuals who had high school diplomas and college degrees were getting better employment opportunities. After earning his diploma, he took junior college classes and was then able to take advantage of a program offered by Louisiana State University while serving.

After retiring from the military in 1973, he got his bachelor’s degree in sociology from the University of Hawaii and went on to pursue his master’s degree at LSU.

While chasing after his academic goals he worked at a restaurant and later as a warden at the Louisiana Department of Corrections to support his family. Although he has several degrees under his belt, he doesn’t intend on stopping his academic journey anytime soon. He plans on starting law school next fall.

“Age is an artificial constraint. There’s nothing magical about 65, 75, 95, 105. Your behavior, your activities should be guided by your physical fitness and your mental fitness,” he told The Advocate. “We’ve been so socialized to believe that once you hit a certain age, I’ve done my thing, so I’m going to sit back and enjoy life. OK, if that’s your thing, that’s your thing. But to me, age doesn’t mean that much. It’s whether or not I have the ability to be doing the things need to be doing.”