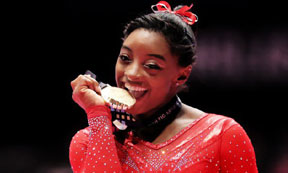 These talented Black girls are headed to Rio de Janeiro, Brazil, where they will compete against the world’s finest gymnasts on an all-star team.

Simone Biles will make her Olympic debut with vet Gabby Douglas on the 2016 U.S. gymnastics team.

These talented Black girls are headed to Rio de Janeiro, Brazil, where they will compete against the world’s finest gymnasts on an all-star team.

During the Olympic trials, Biles was a standout, earning the only automatic qualification spot, according to Team USA.

Douglas has already made history at the games as the first U.S. athlete to win both team and all-around gold medals.

She told the site she is bringing the same amount of concentration and focus to her second stint at the games: “I am definitely tuning out the world. I haven’t been on social media since P&Gs. I haven’t posted anything. Even if you see those posts, it’s not me. Someone does sponsored-posts for me. I’ve been in my own bubble.”

As a crowning jewel to her summer at the games, Douglas just got her own Barbie doll. Along with other sheroes, Ava DuVernay and Misty Copeland, the 20-year-old has a little Olympic mini-me.

“I’m so excited,” Douglas told People. “My older sister and I used to play with Barbies and create these dramatic fantasy stories, so it’s such a huge honor.”

We wish the entire Team USA luck as they represent American athleticism on the global stage.