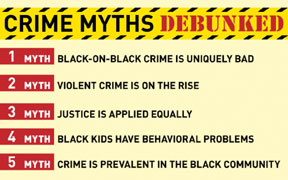 WASHINGTON D.C.  (NNPA) – Whites often overestimate the amount of crime committed by Blacks and “associate Blacks and Latinos with criminality,” beliefs that are widespread and also held by whites who work in the criminal justice system, according to a new report on racial perceptions of crime by The Sentencing Project.

The report said, “White respondents in a 2010 survey overestimated the actual share of burglaries, illegal drug sales, and juvenile crime committed by African Americans by 20-30 percent.”

Despite recent advances in sentencing policies and a reduction in the number of prisons nationwide, the report said that racial perceptions of crime continue to endure as “a driving force of criminal justice outcomes.”

According to The Sentencing Project, Black men are six times more likely to be locked up behind bars than white men, and 1 in every 10 Black men in their 30s is in prison or jail on any given day, trends often driven by, “criminal justice policies and practices, and not just crime rates,” the report said.

Media depictions that often portray whites as victims and Blacks as criminals fail to challenge deep-rooted racial bias held by white audiences, missing a valuable opportunity to foster positive dialogue between the races. Homicide is most often an intra-racial crime, but journalists at a major newspaper in Columbus, Ohio, for example, were more inclined to cover cases in which white women were the victims or Black men were offenders and avoided cases in which Blacks were murdered by whites and white women murdered white men, according to the study.

When whites perceive that Blacks commit more crime, they are also more likely to push for tougher crime laws such as mandatory minimum sentences and policies associated with the War on Drugs. Whites also outpace minorities when it comes to sup-port for the death penalty.

A 2014 brief published by the National Academy of Sciences revealed that about 300 innocent defendants have been sentenced to death since 1973, and because Blacks are convicted of murder at higher rates than whites, researchers believe that innocent Blacks are also overrepresented on death row.

According to the report, “implicit racial bias has penetrated all corners of the criminal justice system,” and contributed to disparities in police stops, prosecutorial charging, and sentencing.

The continued implicit and explicit bias perpetuated by law enforcement officials results in less cooperation from low-income and marginalized communities, which further limits the effectiveness of the criminal justice system and ultimately endangers the public safety of all Americans, not just Blacks and Latinos.

“Racial perceptions of crime have even led to the deaths of innocent people of color at the hands of fearful civilians and police officers,” stated the report.

The study recommended that lawmakers study the racial impact of new crime policies before implementation and provide better resources to defend poor and minority offenders in court. In recent years, states have also “opted out of the federal welfare and food stamp ban for people with felony convictions” and acted to make it easier for people with criminal records that have repaid their debt to society to find jobs.

Recent events in New York City, Ferguson, Mo., Los Angeles, Calif., and Beavercreek, Ohio, where unarmed Black men were killed by police under controversial circumstances, underscore the lingering effect of negative racial stereotypes and perceptions the criminal justice system, according to the report.

Nazgol Ghandnoosh, a research analyst at The Sentencing Project and the report’s author, said, “Unless we tackle these issues head-on, we’ll continue to have more Fergusons and a criminal justice system that’s on overdrive.”

port’s author, said, “Unless we tackle these issues head-on, we’ll continue to have more Fergusons and a criminal justice system that’s on overdrive.”