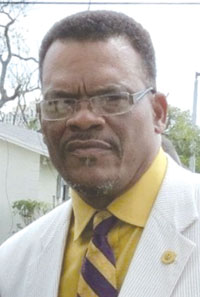 Bobby Henry Sr.,  is the recipient of the 2017 Angelo B. Henderson Community

WASHINGTON, D.C. — The National Association of Black Journalists (NABJ) announced today that Bobby Henry, publisher of the Westside Gazette in Fort Lauderdale, Florida, is the recipient of the 2017 Angelo B. Henderson Community Service Award.

The award, named after the late Angelo B. Henderson, recognizes a journalist who has had a positive impact on the community outside the realm of journalism. Henderson was a Pulitzer Prize-winning reporter for The Wall Street Journal who later became a minister, community activist and radio talk show host. Henderson also served NABJ in numerous capacities including chapter president and national parliamentarian.

Upon receiving word that he would be honored, the self-proclaimed chef first expressed surprise and disbelief. Clearly someone was pranking him, he said. “I’m usually not short on words,” said Henry. “I was elated and immediately thought about George Curry (former editor-in-chief of the NNPA newswire service and long-time NABJ member and former Journalist of the Year) and here’s a group that I hold in high esteem honoring me. I consider it a blessing and huge honor.”

Citing his work in the area of HIV/AIDS, NABJ President Sarah Glover praised Henry for his activism in a critical area for all communities. He continues to be a vocal advocate for those infected and impacted by the disease.

Henry’s activism motivates him to become involved in impoverished communities through ministry. It is not un-common to see Henry and several of his friends in these blighted areas of their city in prayer circles on the street, sometimes with known drug dealers or mothers praying for their children.

Henry attended Bethune-Cookman College before transferring to study journalism at Florida A&M University where he was a member of the famed Marching 100 Band. He later moved closer to home to attend Florida Memorial College. After graduation, he went to work at the family-owned Westside Gazette Newspaper, in Fort Lauderdale, Florida, continuing the legacy his father began in 1971. In response to negative media coverage and the refusal of the local daily paper to print a retraction, businessman Levi Henry, Jr. secured advertisers to publish his own paper.

Pointing out that the birth of the Westside Gazette Newspaper and NABJ occurred in the same decade and with similar missions, Glover said, “It is important that we continue to tell our stories and speak truth to power. Bobby uses his publication and his faith to serve not just his local community, but communities around the world, just like Angelo did.”

Besides being appointed by then Governor Jeb Bush to sit on The Florida Black Business Investment Board, Mr. Henry has been active on the boards of numerous organizations including the Negro Chamber of Commerce and the NNPA. He is also an active participant with the Fort Lauderdale Branch of the NAACP (life member), New Mount Olive Baptist Church (deacon), McDonald Lodge #70 A.F.&A.M. and his fraternity, Omega Psi Phi Fraternity, Inc. (life member). He is the current president of The Florida Association of Black Owned Media, Inc.

Henry will be presented the award during the NABJ Convention in New Orleans, La., which takes place beginning Wednesday, Aug. 9-13, 2017. For additional information, visit www.nabj.org

During the 1993 investigation into Michael’s alleged pedophilia, his sister Latoya created a firestorm by saying that she “would not be a silent collaborator in my brother’s crimes against little children.” […]