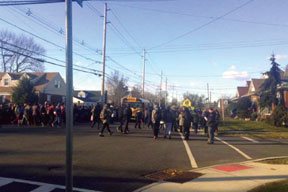 (Reuters) – Bomb threats were phoned in to at least nine schools in New Jersey this week, forcing evacuations or lock-downs, a spokesman for the Bergen County Sheriff said.

Four of the schools were soon given the all clear but searches were still underway at five others, the spokesman said.

He said he could not confirm a media report that one of the schools had also been threatened with a mass shooting.

The threats – which may have been automated because they were so similar – were dialed in at about 8:50 a.m. to high schools in Teaneck, Garfield, Tenafly, Clifton, Fair Lawn, Leonia, Bergenfield, Englewood and Hackensack, said sheriff spokesman Anthony Cureton.

“Four of the nine have been cleared. Dogs came in and did the sweep,” Cureton said.

He declined to say which of the schools had been cleared of the threat.

All of the schools are located in Bergen County in northern New Jersey.