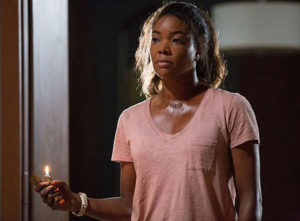 This summer’s thriller genre is off to a great beguiling start!  Mrs. “Wade-County”, Gabrielle Union, puts in a herculean performance.  If you have not seen the trailer, then you will likely be fooled thinking that it is a femme fatale or jilted lover script. Nope, she portrays a role that traditionally goes to Caucasian women. Think Jodie Foster in the thriller “Panic Room”.

Rarely do we get a movie where a Black mom comes to the rescue to save her children.  She musters the fortitude to become “MacGyver” like, in her ingenuity to break into her digitally aged fortress of a home.

The film opens with a man named Isaac (Damien Leake) going for a jog from the city to a suburban neighborhood. He gets hit by a pick-up truck on the way. The driver steps out of the car and walks over to Isaac and stomps his head in.

Sometime later, Isaac’s estranged daughter Shaun Russell (Gabrielle Union) is driving to Isaac’s old home with her kids Jasmine (Ajiona Alexus) and Glover (Seth Carr) in order to settle the estate and sell the house. Upon arriving to the house, Glover finds security cameras in the basement, along with the remote that controls everything in the house.   Glover has some of the most precocious scenes.

His best scene is when valiantly trapped in the closet and faced alone with the killer he pulls a glock, then points it directly in the man’s face. The kid almost stole the movie.  Put this one on your movie list. If you don’t catch it at the cineplex, get it on BluRay or NetFlix. You will enjoy this chiller down to the last minute.