PARKLAND, FL — Fed up with media censorship and exclusion from their peers, junior classmen Naomi Davidson, Danielle-Ali Dayes, Mei-Ling Ho-Shing, and Tyah-Amoy Roberts, believe the outpour of support following last month’s mass school shooting at MSDHS is racially biased. Amongst the group is a strong belief that mainstream media is controlling the narrative of the tragedy. Together, they question where is this type of support when innocent unarmed Black kids are shot at the hands of reckless gun owners– including police officers?

Some adults may find it difficult to publicly address the country’s race problems; yet, these students confront this sensitive issue head-on, with intellect and the utmost respect.

These young ladies were eager to express themselves. They started to over talk each other, but quickly realized that they all needed to be heard. Through their bonded friendship and trust of each other, they worked out a solution amongst themselves as to who would talk first.

“We have access to talk to the other news stations who are parked outside of our school, but we didn’t want them to dictate what we should say on camera or edit out how we really feel,” Tyah-Amoy explains after witnessing popular media outlets instruct students on what they should say about the tragedy.

When asked, “How does it feel to return to school?”, they replied that there were numerous therapy animals available for them to pet, commemorative rock painting, and immediate access to counselors, but expressed that the heavy police presence on their first day back didn’t make them feel protected.

Naomi Davidson had concerns for the other schools in the inner-city, predominately Black schools. “We appreciate the attempt to help us heal…but what about the other schools? What about Dillard, Ely, Fort Lauderdale High or other schools? It seems like all the police are here. Who is out there making sure this doesn’t happen to any other school? Being surrounded by guns doesn’t make us feel safer. Especially after we’ve had cops on campus with guns that didn’t protect us, how can we feel comfortable that these cops are here to protect?” Davidson asked with great concern.

Some students from this group, who refused to be coerced to tell a different story, saw the carnage first hand.

Mei-Ling says she was on the second floor of the freshman building where the massacre occurred. Teachers shouted, “don’t look down, don’t look down.”

“I held my friend’s hand and just looked forward as we walked passed the dead bodies” she tells our crew.

The girls agreed they typically feel segregated from their peers but admit they do feel “a sense of community and love” since the catastrophic event. Blacks only account for 4% of the student population at MSDHS.

“The school Principal Mr. Thompson has gone above and beyond to make sure that everyone is coping emotionally… and feels safe,” Naomi stated.

They candidly described the school’s culture prior to the shooting – students stay in their own circles and tend to be disrespectful.

Tyah-Amoy Roberts wanted us to understand the climate of which they dealt with before the shootings. “They [other non-Black students] touch our hair without permission, make abundant use of the N-word excusing the behavior to quoting rap music, and say that we’re igniting violence when we get passionate about issues that are important to us, but when Emma González gets passionate, she’s cheered on. We love Emma though,” they all nodded in agreement. “She’s amazing.”

Race has been a subject of concern before as it relates to the expressions of how passions can be interpreted falsely. In a response to Black Lives Matters, a letter was published in the school newsletter magazine stating, “they seem to be good for nothing but creating hatred and mistrust between civilians and police… Black Lives Matter don’t want equality. They want superiority.” Bothered by the fact that this type of accusation was published. Collectively these students wrote a response letter to the editor. The rebuttal stated, “the people who are paid to protect and serve us should not be hunting us like animals, especially when the only “weapon” on that Black man or woman’s body is a pack of Skittles, a wallet, or a cell phone… Black Lives Matter is a movement that is not only important, but imperative.” The students aim to get the fair attention and publicity of their viewpoint as others have been given.

The students pointed to several things which speaks to what they feel to be signs of inequality: immediate action for calls to reform gun laws, thousands of dollars rushing in from donations, expedited meetings with elected officials and the NRA. These students feel that being white and affluent equal the unfair power in America.

There have been several incidents in our county and state where the crime of gun violence in low-income areas and the outcry for justice was not as loud, publicized, or funded by local corporations to seek change.

The girls don’t want to desensitize the efforts that are currently being shown, but why now?

Gun violence has been a problem in America, and this shooting hits close to home. It has been a problem for years, Columbine, Sandy Hook Elementary, as well as Trayvon Martin, Sandra Bland, Philando Castile, and the young girl who was shot by a policeman at her grandmother’s house in her sleep.

“Have we not been fighting these same causes,” asked the girls. They acknowledged that the Black community has been protesting and pleading for safer gun laws, more mental health resources and fair representation for years. However, when a “prestigious” community is affected, everyone is ready for reform now.

This group says that they are not done talking. “We are #DouglasStrong; we hope it won’t just be another trending hashtag.” They say that they will stand with their fellow students in this fight for gun control and school safety, but when injustices happen to people that look like them—they want everyone to stand with them. 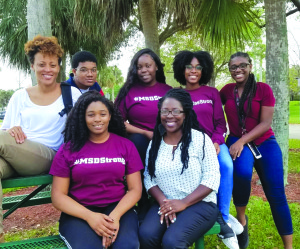