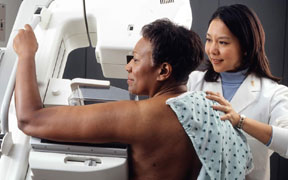 Researchers have known for years that African American women die of breast cancer at higher rates than white women. Now a new study finds that the rates vary from city to city and the disparity is getting worse, not better.

The study, which looked at breast cancer deaths between 2010 and 2014 in the 43 most populous U.S. cities, found that African American women are 43% more likely to die from breast cancer than white women. That is an increase from 2009, when the difference in death rates was 39.7%.

“This disparity results in 3,854 excess deaths of Black women every year. That is a shocking and alarming number,” says study researcher Marc S. Hurlbert, PhD, of the Breast Cancer Research Foundation in New York.

In 42 of the 43 cities examined in the study, African American women die from breast cancer at higher rates than white women. In Boston, women of both races die at about the same rate.

The difference in death rates is “startlingly high” in Atlanta, where African American women are dying of breast cancer at a rate more than double that of white women, according to the Avon Foundation, which funded the study.

“My hope is that as people look at this data and see these numbers, they understand we need to make sure we are ending breast cancer for every woman, not just some women, and I hope it is a call to action in many of these communities,” says Cheryl Heinonen, president of the Avon Foundation.

The study did find some cities, such as Boston, Philadelphia, and Memphis, had significantly improved the disparity. Researchers say these cities are taking steps like setting up task forces aimed at improving mammography quality and expanding screening, diagnosis, and treatment programs to cover uninsured women. In Chicago, for example, the Metroolitan Chicago Breast Cancer Task Force focuses on quality of breast imaging and quality of cancer care.

In Boston, public health leaders, including doctors and scientists, have formed the Boston Breast Cancer Equity Coalition, which works on a variety of strategies, says Tracy Battaglia, MD, MPH, associate professor of medicine and epidemiology at Boston University Schools of Medicine and Public Health.

Those strategies include patient navigation, where guides are assigned to help at-risk women navigate medical care.

“Boston now has a rich net-work of patient navigators who meet regularly to share their best practices,” Battaglia says.

Researchers didn’t analyze reasons for the disparities be-tween Black and white death rates in this study but have started another to address that question. They believe a number of things could be involved, including lack of access to quality health care.

One theory is that advances in mammography and in treating breast cancer “were disproportionately available to white women,” so breast cancer deaths among white women decreased, says study researcher Bijou Hunt, an Epidemiologist at the Sinai Urban Health Institute in Chicago. “Black women were not getting the same access to resources, so their rates stayed the same or got worse,” she says. But researchers stress more research is needed to get definitive answers.

Sheryl Gabram-Mendola MD, director of the Avon Foundation Comprehensive Breast Center at Grady Memorial Hospital in Atlanta, sees firsthand the barriers many African American women face getting tested. Many don’t reach out for help until their cancer is at an advanced stage, she says.

“When I ask my patients why they delayed seeking help, many say they were fearful of finding out they have breast cancer, mostly because of limited or lost financial resources and they are not sure how to pay for care. A lot of women we treat are also heads of households and providing care to others, so they put their health care priorities second and don’t want to speak out,” Gabram-Mendola says. She believes mixed messages in recent years about the right age to start getting mammograms may also be adding to confusion about when to start getting checked.

Gabram-Mendola says efforts are underway in her city to bring about change. One example she says is that doctors from Emory University and Morehouse College formed a group that meets weekly to talk about all breast cancer patients seen at the center and to coordinate similar care across schools.

But Hurlbert says one or two institutions alone can’t solve this problem. “It has to involve all the hospitals, imaging facilities, and private practices across a city to make a difference,” he explains.

What Can You Do?

Talk with your doctor about the best age to start getting regular mammograms. Medical groups have differing opinions, ranging from age 40-50. Breast cancer can show up earlier in African-Americans, especially a particularly aggressive type known as triple-negative breast cancer. If cancer runs in your family, experts say you may need to start getting checked at an earlier age and with enhanced screenings like MRI, which offer more sensitive imaging techniques and are sometimes used for women at high risk.

If you feel a lump in your breast, talk to your doctor immediately.

Use an accredited center for screening and treatment. Find one through the National Accreditation Program for Breast Centers.

Yearly mammograms are covered by most insurance plans, Medicaid and The Affordable Care Act.

Don’t be afraid to ask for financial help. You may qualify for Medicaid assistance or be eligible for grant funding at a hospital. The CDC also has a National Breast and Cervical Cancer Early Detection Program that provides free and low-cost screening tests to those that qualify.

Don’t be fearful. Women have a better chance of surviving a breast diagnosis than in past years, especially when diagnosed early.

Hair relaxers are linked to tumors in Black women