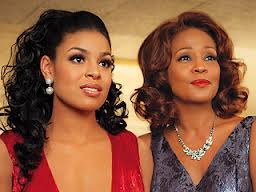 The 1976 version of the movie “Sparkle” is often connected to an Aretha Franklin album featuring Curtis Mayfield songs — even though the Queen of Soul isn’t in the film.

While “Sparkle” gets lumped in with “Dreamgirls,” the two stories have more differences than overlaps.
Here we have three sisters: Sparkle (Jordin Sparks), a brilliant songwriter but too shy to take the stage herself; Sister (Carmen Ejogo), who craves the spotlight and its rewards; and Dolores (Tika Sumpter), happy to harmonize until she can get into med school.

Whatever musical dreams the talented trio has, they have to operate behind the back of their disciplinarian mother Emma (the late Whitney Houston), who had her own experiences in show business and would rather spare her daughters her troubled fate.

But in true “Mama, I Want to Sing” fashion, Sparkle attracts the eye of up-and-coming manager Stix (Derek Luke), and their budding musical careers are off and running.

Sister winds up getting seduced by Satin Struthers (Mike Epps), a self-described “coon” comedian who mocks black people to the delight of white audiences, and drugs and domestic abuse follow quickly. Can the trio keep it together when temptation beckons all around them? Will Sparkle learn to stop hiding her light under a bushel? And what’s going to happen when Emma finds out?

The answers to these and other questions aren’t too tricky to solve, but Brock Akil’s script makes these hoary show-biz clichés feel fresh and vital. And even though the film gives us a fantasy version of late-1960s Detroit (riots are mentioned but never seen in this gleaming, candy-colored paradise), the film zips along from one terrific number to the next.

The main weakness of “Sparkle” comes from the actress playing the title role. “American Idol” winner Sparks is a beautiful young woman with a great singing voice, but she’s too much of a Disney Channel majorette for this movie.

It’s hard, of course, not to think about the tragic passing of Whitney Houston while watching the film, but “Sparkle” makes for a strong farewell for this troubled artist. Her acting is spot-on, from her tough-love for her children to her distrust of the secular world and its pleasures. By: Reuters

When Whitney Houston passed away, the world lost a voice, a mother, a sister, a daughter, a cousin and a friend. Whitney Houston was many things to many people. She had a family life, a record company life, a concert tour life, a mode-ling career life, and a family life, a family that was bigger than we probably ever knew. We had so many questions when she died and now in steps Director Kevin MacDonald, Miramax, and Roadside Attractions to help answer our questions. […]

She won two awards in the music categories: outstanding song, for the “I Look To You” duet with R. Kelly […]

Bobbi Kristina Brown, 22, the only daughter of singers Whitney Houston and Bobby Brown, died Sunday, nearly six months after she was found unresponsive in a bathtub of her home, her family said. Brown has […]