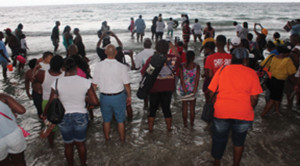 A new chapter in Florida’s history was written on Aug. 6, 2016 during a special ceremony honoring two of Broward County’s very own civil rights icons with the renaming of John U. Lloyd Beach State Park to the Dr. Von D. Mizell-Eula Johnson State Park.

Hundreds of well-wishers, including members from the Mizell and Johnson families, attended an afternoon filled with nostalgic memories by those who once shared fun in the sun albeit during the days of segregation. During those days Dania’s “Colored Beach” was the only place where Blacks could enjoy some leisure time with their families on the eastern shores of Broward County.

Lorraine Mizell, the niece of the late Dr. Von D. Mizell, had a particular connection with the day’s festivities as being one of the original groups of residents to join Dr. Mizell and Eula Johnson in the first “wade-in” by Blacks in 1961, in an attempt to desegregate Fort Lauderdale Beach, which had been designated for “whites only.” Mizell, 75, recalled the incident describing the chain of events, as if it were just yesterday.

“My sister Myrtis and me, along with two other college students participated in the first “Wade-In” in 1961. My uncle, Dr. Mizell and Mrs. Eula Johnson drove a group of us college students to Fort Lauderdale Beach. We all got out and Dr. Mizell told us to get in the water while he and Mrs. Johnson stood near on the beach. As we got in the water, whites nearby started staring at us. The whites that were in the water got out. After about 10 minutes a police officer showed up and briefly spoke with Dr. Mizell. Afterwards my uncle told us to come out of the water.”

Although the first “wade-in” resulted without incident, sub-sequent attempts to integrate the beach led by Johnson resulted in arrests of those who participated.

Norris Turner, 73, also participated in a “wade-in.” He came down from his home in Columbia, Md. to be on hand for the re-naming ceremony.

“I’m just really happy and proud to be here to witness what is happening here today,” said Turner.

The renaming of John U. Lloyd Beach State Park comes on the heels of efforts by state lawmakers Senator Christopher “Chris Smith” and State Representative Evan Jenne, both on hand to handle master of ceremony duties for the day’s event. Sen. Smith conveyed his sentiments on the occasion and shared his motivation for getting behind the effort.

“Anytime our community has an opportunity to be recognized for building this county is a great thing. A lot of our history is not known and every chance we get to let others, especially the younger generation, know is a great thing.

“What I learned about our history, what I learned about the people who really fought and put their lives on the line for this park; I felt bad that it wasn’t named after them sooner. It’s taken too long but as I said, it’s never too late to do the right thing.”

The brain trust behind the renaming stems back to family member and Harvard University trained attorney Don Mizell, 69, who helped initiate the process for the first re-naming of a state park in Florida by an African American. Mizell comes from a long line of family trailblazers who have pushed the envelope when it comes to fighting for social equality and equal justice for

Mizell has used every tool at his disposal to further what he considers a cause that’s been long overdue, one that’s been shared by many for years throughout the community.

“I’m literally thrilled and amazed and deeply humbled and grateful because it was a long road. I gave speeches, I wrote articles, I’m writing essays, I’m on line petitioning, I’m meeting with elected officials. I’m going wherever I can to make people aware that the facts make it so that this has to happen. I’m trained as a Harvard lawyer like President Obama so I know how to marshal this act in a way that makes it so that you literally have to agree because it’s something that if you don’t agree you’ve got to be up to something wrong. That was the strength of what I was doing.

“Chris Smith is the one who took it and put it through with his masterful inside game. It took an outside-inside game. To me it was about speaking the truth and standing on the rock and walking in the light. And that should be enough. You can’t really argue with the facts. You’re entitled to your opinion but not your facts,” Mizell added.

Dr. Mizell was the first president of the Fort Lauderdale NACCP, a position which John-son held as well. Dr. Mizell was a prominent surgeon and John-son a business owner. They both shared a passion for fighting for justice and racial equality which never wavered throughout their lives.

He recalled his grand-mother’s tireless efforts to bring about change in the face of threats against her life by those who were opposed to change of the social injustice of segregation prevalent throughout the Jim Crow Era in the South.   Johnson recalled the phone ringing in the middle of the night with threats while his grandmother’s desegregation efforts were underway.

“We lived through a civil rights period that was certainly dangerous and of course we needed a person like her. One thing my grandmother was, she was very passionate about civil rights. She only had a GED but she had a Ph.D. in life in how to deal with issues that surrounded her community,” said Johnson.

Dania Beach Vice-Mayor Albert C. Jones was born and raised in Dania Beach and grew up going to “the Colored Beach.” He put the day’s events in perspective both then and now.

“I remember getting on the ferry and coming across to “the Colored Beach.” We would get here and just have a great time. Thanks to Dr. Von D. Mizell and the Eula Johnson families and certainly to the elected leaders who have been behind this, I think this is a milestone.