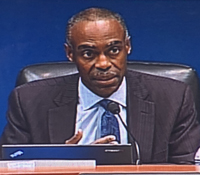 Should Broward County Public Schools Superintendent Robert Runcie be fired? That’s a question the nine-member Broward County school board answered with a NO vote 6-3.

Lori Alhadeff, the newest Board member — and parent whose child was killed in the mass shooting, was adamant about sending Runcie packing.

Based upon the input from the majority of those in attendance, including the Board members, the opinion of the job that Runcie has done warrants that he remain as the Superintendent of Broward County Schools.

Runcie has been scraped over with coarse sandpaper and pushed into a pool of alcohol and yet he survived  battered, torn, and emotionally scarred but still willing to serve.

A simple majority was needed to vote out Runcie, but there wasn’t enough votes to make the firing possible.

Runcie has been able to build public trust and confidence in this school board and administration despite the negative reputation the district garnered years before his arrival.