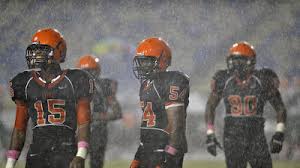 Hurricane Sandy didn’t make landfall in South Florida, but her outer bands took a toll on some of the biggest high school football games of the year.

That meant more than a dozen football games, many of them critical district matchups with post-season implications, had to be rescheduled to either Saturday or Monday.

For some teams, like Fort Lauderdale, that meant a few extra days of rest.

The Flying L’s were set to play a District 15-6A game against Archbishop McCarthy on Thursday night.

That matchup has been pushed to Monday, postponing a possible celebration that has been decades in the making.

Fort Lauderdale coach Richard Dunbar said having to wait a few extra days for that opportunity has been tough.

“It’s very disappointing, obviously,” said Dunbar. “The guys were all geared up and excited. It’s a possibility for us to win something that hasn’t been won here in a very long time. They wanted to see that happen, but they understand they can’t fight Mother Nature.”

While Fort Lauderdale (4-3, 2-0) will benefit from extra rest before playing McCarthy, they, like 12 other BCAA teams will now have to play two games in five days.

The Friday after playing McCarthy, Fort Lauderdale will face its biggest rival, Stranahan in Week 10.

Things are even tougher for schools like Hollywood Hills, South Broward, McArthur, Northeast and Monarch who will play their Week 9 games on Monday, then take the field again Thursday.

Broward County athletic director Rocky Gillis said his office tried to minimize the number of schools playing on short rest, but scheduled homecoming games and the availability of fields and officials made it challenging.

“There are some homecoming issues that came into play,” Gillis said. “We tried to make sure the schools feel comfortable with playing on a shortened week. These are all district games that have a lot of importance to the rest of their seasons, and some of them are big rivalry games.”

To deal with the short week, many coaches are planning to limit contact in practice next week.

Instead, they say they’ll have their teams focus on film sessions and walk-through workouts.

“It’s not going to be a normal work week and what the kids are used to,” said South Broward coach Allen Held, whose Bulldogs will face Hollywood Hills on Monday, then play a District 15-7A game against McArthur on Thursday. “We have to be innovative and focus on Monday. Only after that can we look ahead to Thursday.”

Despite the challenges, most coaches say they’ve tried to take the scheduling uncertainty in stride.

Because they can’t practice outdoors, some have tried to move their workouts indoors. Others have used the unexpected time to get their players extra rest.

“Everyone’s in the same boat,” said Plantation coach Steve Davis, whose Colonels have already clinched a playoff berth, but can win the District 15-7A title with a win over St. Thomas Aquinas on Saturday. “It’s deep in the season. You have to be ready to play.”