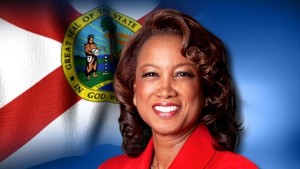 CARROLL DELIVERS FLORIDA FOR ROMNEY After asking for a moment of silence to honor the people affected by HurricaneIsaac, Lt. Gov. Jennifer Carroll on Tuesday delivered Florida’s 50 delegatevotes to Republican presidential candidate Mitt Romney. “Florida is theSunshine State — well, most times,” Carroll said during a roll call ofstates at the Reicanpubl National Convention in Tampa. She also borrowed a pagefrom Gov. Rick Scott, saying Florida showed this week it knows how to respondto hurricanes and provide hospitality to visitors. She also noted that Floridawas the first large state to back Romney during this year’s primaries andcaucuses, though its delegate votes were reduced from 100 to 50 because ofmoving up the primary date. A short time later, New Jersey put Romney over the1,144 votes he needed, making him the nominee. As the roll call went state bystate, one of the biggest cheers went up for Arizona Gov. Jan Brewer, who hasbacked controversial measures aimed at cracking down on illegal immigration.Also drawing loud applause was seemingly every mention of Texas Congressman RonPaul, who collected scattered delegate votes.

SCOTT: ROMNEY MESSAGE WILL BE HEARD ABOVE ISAAC Gov. Rick Scott told reporters Tuesday that Hurricane Isaac will not detractfrom GOP hopeful Mitt Romney’s address before the Republican NationalConvention. Slated for Thursday, Romney’s speech will have to compete with newsof Isaac, which is expected to make landfall in Louisiana later this evening.Scott said he was confident Romney’s message would be heard  above the dinof Isaac coverage and that Romney has his work cut out for him. “This raceis no different than the 2010 race , it is all about jobs,” Scott toldreporters in Tallahassee. “This is Gov.  Romney’s opportunity to tellthe American public why his plan to turn around the American economy is the onethat will work.”

DAY: DEMOCRATS ARE THREAT TO LIBERTY Republican National Committee Chairwoman Sharon Day of Florida told delegatesTuesday that the threats to liberty the Founding Fathers had in mind when theyset up the country were embodied in current-day Democratic leaders. “Weknow the problem, America: Their names are Obama, Biden, Reid, Pelosi andHolder,” Day said from the dais at the Tampa Bay Times Forum on the firstfull day of convention business. “What they have done-and will continue todo, should Obama be re-elected-runs contrary to the values we believe in andthe principles we stand for. It is our duty, as citizen activists, of thisgreat Republican Party, to fight to restore the values of our FoundingFathers.”

SENFT STEPPING DOWN AS GOP COMMITTEEMAN The Republican Party of Florida on Tuesday honored longtime nationalcommitteeman Paul Senft, who will step down from the post. Lt. Gov. JenniferCarroll presented a lifetime achievement award to Senft during a breakfast ofFlorida delegates attending the Republican National Convention. “Eightyears is enough,” said Senft, a Polk County resident. “This is a hugestate, from Pensacola to Key West.”

How low will the GOP go?

The business of politics

The modern political party system in the United States is dominated by the Democratic and Republican parties. It’s important that Black Americans recognize that neither of these parties have helped us to gain political equity. Supposedly the purpose of political parties is to bring people together who hold similar points of view about government. […]