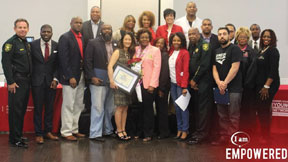 The purpose of the symposium, spearheaded by Dione Y. Trawick, Esq., Ruby Green, Esq., and Destiny DeJesus was to in-form young adults of their constitutional  rights as well as exercising them when being stopped and searched and how to conduct themselves, communicating effectively; thereby, fostering mutual respect when encountered by law enforcement officers.

The first of a two part program began following a welcome by the presidents of the respective organizations.

The first part of the symposium consisted of a “Know” Your Rights workshop.  More than 90 youth from ages 12 through 17, along with 50 adults watched a 45-minute video outlining their rights when dealing with police encounters, which was followed by interactive workshops for the youth with role-playing as well as questions and answer sessions, facilitated by attorneys, investigators from the law office of the Broward Public Defender, law enforcement from the Broward Sheriff’s Office and the Sunrise Police Department questions and answer sessions. A motivational speech was provided for the youth by District V, School Board member, Dr. Rosalind Osgood.

The youths and community openly discussed with Broward Sheriff, Scott Israel and the panelists topics such as racial profiling, scenarios that escalate negative police interaction, ways of avoidance, and procedures for fostering complaints against law enforcement.  Youths also discussed the civil citation program as well as proposed changes to the Florida Stand Your Ground Laws and police oversight boards.  Panelists provided their opinions, personal experiences and possible solutions to the problems experienced within the community, youth in particular, and law enforcement.