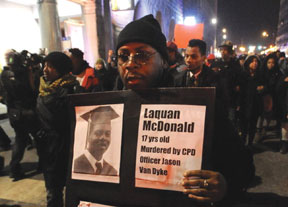 Chicago police have shot another teenager, and gangs are allegedly planning to retaliate for his death.

For years, racial tensions and gun-violence in Chicago have been brewing, but this summer, the city is on the verge of boiling over with police shootings, homicides and rising discontent with a justice system that has failed many Blacks for decades. And in the middle of it all is a new Black police chief who’s on the hot seat.

On Thursday, July 28 amid the sweltering heat of summer, a Chicago police officer shot and killed 18-year-old Paul O’Neal, triggering a wave of protests and anger from Blacks who are still reeling from the brutal police killing of Laquan McDonald nearly two years ago.

It happened in the South Shore neighborhood, a predominately Black middle-class community where First Lady Michelle Obama grew up. O’Neal died a violent death. Police said that he was driving a Jaguar that was stolen from Bolingbrook, a suburb west of Chicago. Police officers fired 15 shots at O’Neal as he sped through the South Shore neighborhood. He crashed into two police cars then fled on foot. According to accounts, a third officer chased O’Neal behind a home where he fatally shot him in the back. While he lay face down, bleeding from his gunshot wound, O’Neal was violently handcuffed.

The Cook County medical examiner’s office ruled O’Neal’s death a homicide and the auto-psy report showed that he was killed by a single gunshot wound to the back.

The city’s Independent Police Review Authority (IPRA) on Aug. 5 released nine videos from the officers’ body cameras. The videos can be seen on YouTube. While the recordings show what happened before and after the shootings, none of the videos showed the actual shooting. The body camera of the officer who shot and killed O’Neal was not turned on; stirring suspicions among many Blacks who believe the act was again part of an effort to protect officers involved in controversial shootings.

One video shows O’Neal being handcuffed and an officer is heard saying “Black a— mother——.” Afterwards, another officer can be heard saying “F——— shooting at us.”

Legal analysts have said that without the video of the actual shooting, it will be difficult to bring charges against the officers involved in the teen-ager’s death. The officers who were videotaped before O’Neal died have a greater chance of being charged with a crime, legal analysts say.

One video shows O’Neal being handcuffed and an officer is heard saying “Black a— mother——.” Afterwards, another officer can be heard saying “F——— shooting at us.”

Legal analysts have said that without the video of the actual shooting, it will be difficult to bring charges against the officers involved in the teenager’s death. The officers who were videotaped before O’Neal died have a greater chance of being charged with a crime, legal analysts say.

The swift move was not enough to stop numerous protests that erupted in Chicago hours after the videos were released Aug. 5. Heavy crowds of angry protestors filled the streets of the city’s ritzy Michigan Avenue during Chicago’s busiest tourism season.

While police supporters say O’Neal caused his own death by resisting arrest, activists say police used unnecessary forced in killing an unarmed man who was not a threat to anyone. They say the incident shows that when it comes to apprehending Black suspects, police officers are also the judge, jury and executioner.

“No one should go through anything like this,” said Ja’Mal Green, an activist and spokesman for O’Neal’s family. “It’s always these procedures that we have to wait on for answers. We need more radical people to say ‘Look, I just saw the video and the officer is wrong and should be disciplined immediately.”

On Aug. 3, the police department issued an alert, warning officers to “limit interactions and visibility.” The Chicago Sun-Times reported that the Vice Lords, Black Disciples and Four Corner Hustlers gangs on the city’s West Side held a secret meeting to plan retaliatory attacks in response to O’Neal’s death.

Caught in the proverbially crossfire is the city’s new Police Superintendent Eddie Johnson, who was appointed in April to lead the nation’s second largest police force with over 12,000 police officers. Johnson, a 27-year veteran of the force, became the fourth Black superintendent in the department’s 181-year history.

Once the darling of Chicago’s Black leaders and clergy, Johnson is now struggling to gain respect of activists, who are fed up with police officers who kill Black teenagers with impunity. While Johnson and the department’s top brass take steps to cool protests, activists and residents believe more steps are needed to overhaul the city’s police force.

Since becoming Chicago’s top cop in April, Johnson has been working to heal the wounds left by his predecessor, Police Superintendent Garry McCarthy, who ran a police force that was often accused of racial profiling and using overly aggressive tactics to arrest Blacks and other minorities.

After his appointment, Johnson became more visible in neighborhoods where McCarthy was rarely seen. Unlike his White predecessor, he attended peace rallies, marches and demonstrations. He’s orchestrated police sweeps of over 200 criminals in violent neighborhoods, a move that earned praises by residents and community leaders. To many residents, CPD was slowly becoming the “people’s police” while Chicago’s dark past appeared to be over.

That all changed after CPD officers shot and killed O’Neal under Johnson’s watch. Now, Johnson and his force are on the hot seat. They face protests and doubts in the latest case of police brutality that has thrust Chicago back into the national spotlight. It has also reignited racial tensions in a city known for its overly aggressive police officers and segregated neighborhoods.

During Johnson’s press conference Aug. 4, young Black activists heckled and prevented him from speaking as they vented their frustrations from the latest case of alleged police brutality. A day later, Johnson held another press conference, this time in a more controlled environment with a heavy security presence. He said that police face ‘split-second’ decisions that are often life threatening.

“It’s not easy being the police,” Johnson said. “This is a difficult job and most people don’t understand because they never had to do it.”

The Major Role The Catholic Church Played in Slavery

In 2016, Georgetown University in Washington, D.C. offered a public apology after acknowledging that 188 years prior, Jesuit priests sold 272 slaves to save the school from financial ruin. […]