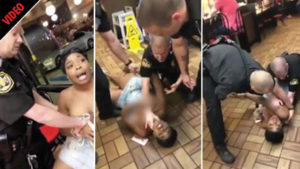 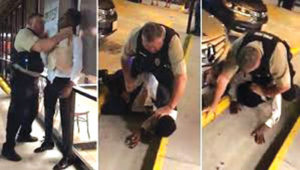 While the incidents occurred in different states, the corporation has responded by validating the use of excessive police force against Black patrons of its restaurants. Chikesia Clemons and Anthony Wall, both of whom had nonviolent disputes with staff, were brutalized by officers arriving at the scene and now face charges for the assaults against their own bodies. Just this week, new reports of another incident in Florida have surfaced where a Black couple was arrested after a nonviolent dispute over their final bill.

Gathering with supporters at Waffle House headquarters in Atlanta, Chikesia Clemons, Anthony Wall, their families, attorneys and activists who support them came together to drop off thousands of signatures demanding the Saraland Police Department and the Warsaw Police Department drop all charges against Chikesia and Anthony and offer them both a public apology.

Tamika D. Mallory, national civil rights activist and Co-President of Women’s March, said, “As Black women and as mothers, we are tired of seeing our sons and daughters being brutalized and assaulted. We know the conduct we saw on the video happens often, and cameras are not always there. Having charges filed against Chikesia and against Anthony is victim blaming at its worst. We will stand with them until the charges are dropped and until Waffle House takes responsibility for its role in the abuse of these two young people.”

“Minority populations are routinely facing discrimination in our society, and this reality is compounded when one has several intersecting minority identities like being Black and LGBTQ/SGL; however, we do not have to — and will not —  support any business, Waffle House included, as long as the organization and its leadership continues to show a lack of respect for the basic civil rights of all human beings,” said David J. Johns, Executive Director of the National Black Justice Coalition. “Dropping the charges against Ms. Clemons and Mr. Wall is a mandatory first step to right these wrongs. And beyond that, before we even consider returning our Black dollars to Waffle House or any other corporation that enables the egregious and discriminatory behavior to which far too many black and LGBTQ/SGL customers experience, it imperative that they invest in the necessary cultural competence training for their employees and implement policies and best practices for working with intersectional communities.”

Brittany Packnett, activist and co-founder of Campaign Zero, added, “Oppression will continue as long as businesses care more about profit than people.  Since Waffle House’s repeated actions send the clear message that they don’t care about marginalized people, we will no longer provide them our profit.  Bigotry should never pay-and Waffle House should be an example to all corporations that our humanity will be respected.”

Instead of rallying on the side of their customers, a sign of sound customer service, Waffle House corporate headquarters doubled down on their violent actions, releasing a statement in support of the Saraland Police Department, which filed criminal charges against Ms. Clemons.

This year, the program also features a travel journalism component when the DTU fellows (#TeamAuthentic and #TeamOptimistic) embark on a road trip in the 2018 Chevrolet Equinox, filing stories along the way as they travel to their second posts and then to Detroit, Mich., for a grand finale. #TeamAuthentic will travel from Atlanta to Norfolk and #TeamOptimistic will drive from New York City to Washington, D.C.

The 2018 DTU fellows, along with Chevrolet and NNPA publishers and editors met up in Detroit for a two-day bootcamp event, hosted at General Motors’ (GM) headquarters. The DTU fellows learned about the Chevrolet Equinox, social media from a global brand perspective, and new Chevrolet marketing campaigns. The fellows also toured the Chevrolet Detroit Grand Prix held at Belle Isle.

Durant, a senior at Morgan State University talked about her expectations for the NNPA’s DTU program this summer moving forward.

As an introduction to the program, Michelle Matthews-Alexander, Chevrolet’s Diversity Marketing Director, talked about the program’s inception.

Hip-hop pioneer and philanthropist MC Lyte returned for the third year to serve as the national spokesman for the program.

This fellowship is unique in that it partners a global auto manafacturer (Chevrolet) with a Black media organization, (NNPA), in an effort to not only expose HBCU students to the Black Press, but also to marketing and advertising roles that exist in corporate America, a space where Black professionals are often underrepresented.

“No other internship is going to have that,” said Denise Rolark-Barnes, the publisher of the Washington Informer. “I think to have relationships with Chevy and the whole concept of discovering the unexpected allows us to define some things about Africa American history and culture.”

Ken Barrett, GM’s Chief Diversity Officer, explained why diversity is key to Chevrolet’s success. Barrett was previously the director of diversity for the United States Navy, where Admiral Mike Mullen helped him to realize that, “The less the Navy looked like America, the more disconnected, as a service, it would become.”

Barrett brought that unique perspective on diversity to his current role with GM. With his focus on diversity of thought to include different factors including gender, race and ethnicity, sexual orientation and veteran status, Barrett intends to lead the charge in a type of innovation that everyone has a stake in. The next game changer will come, he said, in “an organization that listens to all of those perspectives.”

Dr. Benjamin F. Chavis, the president and CEO of the NNPA, said that the NNPA pleased with its ongoing partnership with Chevrolet, especially with the NNPA DTU Journalism Fellowship program.

Rodney Robinson, a 19-year teaching veteran who became a teacher to honor his mother and who struggled to receive an education after being denied one as a child due to segregation and poverty in rural Virginia, was named the 2019 National Teacher of the Year by the Council of Chief State School Officers (CCSSO). […]