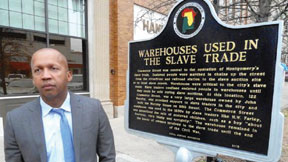 Civil rights lawyer seeks to commemorate another side of Southern heritage: Lynchings

http://tamaralounge.com/?y=Can-You-Buy-Xanax-At-Walgreens Attorney Bryan Stevenson, executive director of Equal Justice Initiative (EJI) and a professor of law at New York University School of Law, is taking monumental steps in implementing a plan to memorialize those that lost their lives during America’s lynching era. The plan – to place memorial markers at lynching sites of Black men, women and children.

Purchase Alprazolam This year, EJI released the report, Lynching in America: Confronting the Legacy of Racial Terror, which documents multi-year investigation into lynching in 12 Southern states during the period be-tween Reconstruction and World War II. EJI researchers documented 3959 racial terror lynchings of African Americans in Alabama, Arkansas, Florida, Georgia, Kentucky, Louisiana, Mississippi, North Carolina, South Carolina, Tennessee, Texas, and Virginia between 1877 and 1950 – at least 700 more lynchings of Black people in these states than previously reported in the most comprehensive work done on lynching to date.

“The narrative of racial difference that lynching dramatized continues to haunt us,” initiative leaders said in their report.

Generic Xanax Online Stevenson and EJI have been working tirelessly seeking leaders in the communities that are the sites of former lynchings, speaking privately with mayors, making plans to address city councils, to secure support to erect the simple bronze markers.

http://bandarbaju.com/sentra-grosiran-daster-smok-dewasa-terbaru-solo-22ribu.html One of Stevenson’s objectives is to change the dialogue on race and narrow the gap he is convinced is at the root of conflicts— attitudes he says date back nearly two centuries.

“There’s still this presumption of guilt assigned to African Americans from people inherently worried about the dangerousness and criminality of Black men,” Stevenson said. “It’s a burden. The police have menaced, threatened and followed us all our lives.”

Alprazolam 1Mg Buy Online Blacks were lynched for playing music too loud, not acknowledging a white person submissively, looking at and speaking to a white woman, re-fusing to remove an Army uniform after World War II or for simply being Black. Often, Stevenson said, the hangings became public carnivals designed to instill fear.

Online Doctor Xanax Prescription Growing up in Delaware during Jim Crow, Stevenson witnessed first-hand the effects of racism. A graduate of Eastern College (now Eastern University), Harvard Law School (J.D.), and the John F. Kennedy School of Government, he has been an advocate, agitator and activists for over 30 years. He has won relief for dozens of condemned prisoners, argued five times before the Supreme Court, and won national acclaim for his work challenging bias against the poor and people of color. He’s won new rights for convicted children and the mentally ill and has been instrumental in overturning the executions of 115 for death row inmates.

http://grosirrumahan.com/tag/baju-koko-al-kautsar-solo-sukoharjo-regency As a young lawyer, he once met civil rights icon Rosa Parks, who made a prophetic observation as he described his life mission of racial equality.

Can I Buy Xanax In Bali As expected, initial support of the new project has been moving about as fast as molasses in January, especially in big cities with a small Black population. Stevenson has focused his efforts therefore in the Black where he knows his plan will receive easy support.

http://artists-atelier.com/blog/page/71/ James Knight, 73, a Birmingham, Ala. resident, fully supports the project. Knight, 73, recently attended a speech Stevenson gave at the city’s Civil Rights Institute. As he waited to meet the lawyer, he told of how a fellow African American friend was once snatched by white men here in the 1950s and castrated in the woods nearby.

He wants a marker on the spot. Said Knight, “I think it’s good to know where we came from.”