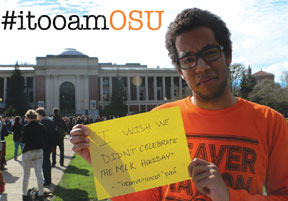 Sustin McDaniels shares a memory for the I, Too, Am OSU campaign, which he helped launch last month. Photo courtesy of I, Too, Am OSU. Patterned after I, Too, Am Harvard

WASHINGTON (NNPA) – If anyone thought the election of President Barack Obama, or the rise of the multi-racial Millennial generation, marked the beginning of a post-racial America, a campaign spreading across college campuses has news for you.

It began with I, Too Am Harvard, a theatrical performance by the Kuumba Singers of Harvard as part of their 16th Annual Black Arts Festival Weekend. The production was centered on 40 unedited interviews of Harvard University students about the challenges of being Black at Harvard. As promotion for the production, the group released its I, Too, Am Harvard photo series, featuring Black Harvard students holding dry-erase boards inscribed with racial microaggressions they had experienced during their matriculation:

“Don’t you wish you were white like the rest of us?”

“You’re lucky to be Black…so easy to get into college!”

“As Black students at institutions of higher learning, our presence is often doubted, questioned, feared, or ignored by our university communities,” explained the show’s producer, Tsega Tamene. “We hope to begin active conversation around this issue.”

On March 3, Buzzfeed, a social news and entertainment site popular among the under-30 generation, ran an article on the photo campaign. The response was immediate and incredible. Over the following days, “I, Too Am,” a takeoff on Langston Hughes’ “I, Too, Sing America,” became a rallying cry for a new generation.

Students of color at other schools started their own “I, Too, Am” conversations on Twitter. It is continuing to pick up steam, spawning thousands of publicly accessible Tweets across 16 institutions, five countries, and three continents.

The movement’s goal is to foster campus awareness and conversation on these microaggressions, and to give students of color a sounding board for their grievances. Each school has tailored the campaign to fit their own needs.

For example, all of the subsequent schools have opened their campaign to all students of color, not just African Americans. A few less racially diverse schools are also highlighting gender, religious, and sexuality microaggressions.

Most student organizers are employing social media, photo blogs, campus demonstrations, forums, or some combination of them.

At Oregon State, for example – where 332 undergraduate, graduate, and doctoral Black students make up just 1.2 percent of the student body – the campaign began on Twitter and Facebook then spilled over into a campus solidarity march against racism. The march brought out hundreds of OSU students, faculty, and staff (including the university president and vice provost).

“When people say racism is over because we have a Black president, I just have to laugh to myself,” says Justin McDaniels, a senior political science major (with focus on international relations) and co-organizer of the I, Too, Am OSU campaign. McDaniels recalls a professor who felt “inconvenienced” by the Martin Luther King, Jr. holiday.

“My generation is definitely aware of [racism], and I wouldn’t say it’s any better or worse, the execution is just different,” says McDaniels. “There’s no more ‘No Blacks Allowed’ in your face. Now, no one wants to be called racist, but they also try to get away with saying racist things.”

At New York University, I, Too, Am NYU exists on social media, and as a photo project with more than 100 participants, both on the main campus and at satellite campuses abroad. The student organizers also hosted an open forum for students of color to brainstorm ideas on what the campaign should do next.

“There’s something growing on our campus – the desire of students of color to take this issue on. We’re always saying we need to stop preaching to the choir,” says María-Mónica Andia, senior social work and Latino studies double-major at New York University, and a co-organizer of I, Too, Am NYU. “We wanted to put in the face of the administration, to say, ‘Hey, did you know this was happening to us?’ And it’s not just the students – but the professors see it happening and they stay passive. I don’t know why, but this is an opportunity for our administration to reflect.”

At Notre Dame, the photo project skips the whiteboard and has students write their messages on their bodies to represent how the slights can’t be wiped away simply.

“My purpose wasn’t to condemn or attack Notre Dame – I have personally enjoyed my time here. Most of [the experiences] were not with professors, it was with our own classmates,” says Zuri Eshun, senior film, television, and theatre major and creator of the photo project. She recalled a class in which she had a front row to herself the entire semester, because none of her classmates (all White) would sit near her.

“I don’t know what I can do in the last month-and-a-half as a student at Notre Dame, but I know I can get these images into someone’s head so the people who’ve said these things know that the thing they did and didn’t think was a big deal, was remembered. Changing the mindset of race on campus is the overall goal, not just filtering what people say.”

And there is barely a difference in the experiences highlighted in these international campaigns: “How did you get in to Oxford? Jamaicans don’t study,” or, “You don’t sound like them,” or, “So when are you going back home?”

Not everyone has embraced these campaigns.

A week after the launch of I, Too, Am Oxford, a challenger appeared in the form of We Are All Oxford, described as a multi-racial group of students concerned about future enrollment of students of color. Instead of racial microaggressions, their dry-erase boards bear either university facts regarding inclusion and minority representation, or positive opinions and experiences with multiculturalism.

“We would like to emphasize that we do not aim to undermine the original campaign and we are not working against them. We acknowledge that racism exists at the University of Oxford and it needs to be challenged,” the photo blog’s description reads, “but we believe that the university is working hard to tackle these prejudices and misguided perceptions. Our aim is to present the full picture.”

With the I, Too, Am NYU campaign, a skirmish broke out on Facebook after one student anonymously (and erroneously) expressed frustration that the campaign only featured Black and brown participants, stating, “Frankly, its tiring to see Black and brown people have their issues magnified every time race is the topic of conversation…. Every ‘race’ (I use that term reluctantly. we’re all [expletive] human) faces their own unique injustices.”

McDaniels and Andia both report offhand remarks either questioning the necessity and validity of such a campaign, or criticizing the campaign for being “divisive.”

On Eshun’s I, Too, Am Notre Dame blog, a self-identified “ethnic race child of immigrant parents” commenter named Alum left a note stating, “I’m sorry, but this movement, among all of the other ‘I too Am’ movements across college campuses, is extremely childish and immature…. [I] am inclined to believe that there is some severe over-exaggeration and hyperbole at play here. I don’t believe for a second that even the most brash of ND undergrads would ever say to another students’ face, ‘go back to where you came from.’ It’s 2014. And I’m not in denial.”

Still, the response at each school has been largely positive.

“I’ve been really surprised at how powerful social media can be as a tool for awareness. It’s an incredible tool to get people involved in a community effort,” McDaniels says. “Racism is still there, and will probably be there for a long time to come. It’s something we still need to work on as a country.”