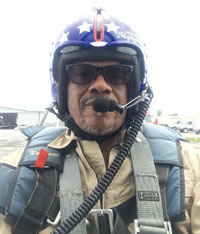 Come fly with me, literally

There is none like unto the God of Jeshurun, who rideth upon the heaven in thy help, and in his excellency on the sky. Deuteronomy 33:26 (KJV)

If someone had told me that I would be flying in an airplane that the Historic Tuskegee Airmen trained in, I would’ve probably said something like, “Yeah right and Hell will freeze over and the devil would be wearing ice cream drawers too!”  So, I guess somebody better ask what flavor is he wearing today. 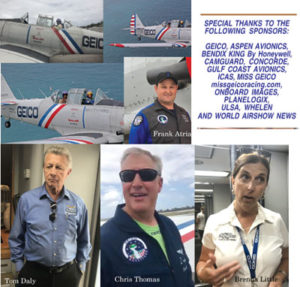 Thanks to Brenda Little of BBIG Marketing, Public Affairs Agency, the person that open the door or should I say that gave me the lift to get into the rear cockpit seat of a 75 plus year-old World War II-era aircraft, and fly with the Skytypers Air Show Team. I was on yet another experience to see God’s handiwork.

The notable roar of the vintage engines filled the space in my helmet between the microphone and my ears as my body trembled from the might of the engines as I hid my nervousness between the vibrations.

Maybe if I had spoken with Frank before flying, I could have settled my nerves a bit.

Chief of Maintenance, Frank Atria, in his eight seasons with the GEICO Skytypers, shared with me that his uncle was a mechanic in World War II working on bombers in England and that he has a photo of him working on the same kind of planes. “I guess you might say that it’s in my blood and an honor to work on planes that are such an important part of U.S. military and aviation history.”

Chris Thomas is a Wing Pilot, and he was the pilot that I flew with. Chris grew up surrounded by aviation and developed a passion for flying at a young age, becoming a third-generation pilot. Not only is Chris a great pilot, he is somewhat of a history buff. “The SNJs flown by our team were originally used as training aircraft for WWII pilots, and the Tuskegee Air Men flew them,” says Chris. Chris was trained by his father, a Naval Aviator, and earned his pilot’s license at the age of 17. Another nugget is that Chris earned an AAS in Fire Science and graduated from Norfolk State University, an HBCU, with a BS in Interdisciplinary Studies-Aviation.

This was a ride back in time in an open cockpit with world-class aviators, and flying close formation was a once in a life time experience for me.

Lead solo pilot Tom Daly is a no- nonsense, focused person, the kind that you want to give you finial instructions of which he did as I was being strapped into the cockpit back seat.

Tom retired from the police department and as the Dean of the College of Aviation, he currently serves as a member of the advisory councils for the Cradle of Aviation Museum. Tom was promoted to 9th degree Black Belt in the Chinese Goju Association. So when Tom gave me my commands, I said yes sir with both thumbs up.

Skytypers Air Show Team is a civilian squadron based in Long Island, NY. The Team was preparing a new demonstration that was unveiled at the FORD Lauderdale Air Show on last weekend. That performance was the second stop of their 2018 air show season.

For this show the Skytypers flew six SNJs powered by 600-horsepower engines. As WWII training aircraft, the SNJs were designed to perform all the maneuvers of fighter planes from the same era, but at slower speeds.

In addition, the GEICO Skytypers are one of a select few organizations in the world that can generate giant skytyped messages.

The Government Employees Insurance Company (GEICO) continues to do remarkable things with and through their relationship with our government and our communities. “GEICO Cares is not just a slogan—it’s who we are, what we stand for and what we do.” Rynthia Rost, Vice President of Public Affairs, explains that GEICO Cares through their hard work of giving back through community efforts.  GEICO Cares work with Habitat For Humanity—is where The Work of GEICO interns are “raising the roof” in Virginia Beach and The Presentation Teamwork makes the dream work when Habitat for Humanity and GEICO presented a newly constructed home and a Recycled Rides vehicle to a military family in Virginia Beach.

The Team was preparing a new demonstration that was unveiled at the FORD Lauderdale Air Show on last weekend. That performance was the second stop of their 2018 air show season.

For 18-minutes, I experienced what seemed like a full day of serenity with burst of excitement as we went through some of the 20 different new tactical maneuvers used in their routine for the 2018 season.

The new performance is supposed to be tighter and more demanding with new enhancements.

The routine might highlight the aircraft and pilots’ capabilities but, it almost cost a complete cleanup job for the maintenance crew.

One of the highest attendance air shows on the circuit is The FORD Lauderdale Air Show.

Needless to say  I’m still soaring. I can honestly say that I’m forever changed. So many people have commented on the live video and told me personally that they lived that flight vicariously through me. One comment that I will always remember was from James ‘Boss Hog’ Freeman. Boss asked me this, “When you were up there, could you see the face of God?” So, I am indeed grateful for the many lives that GEICO and the Skytypers have touched. Thank you.

And Boss, no, I did not see His face, but I felt His hands as they comforted me and brought me safely back down to His earth.

In order to appreciate the change, you got to be changed

In order to appreciate the change, you got to be changed […]