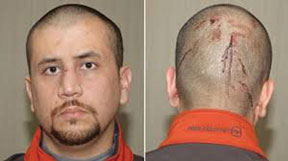 WASHINGTON, D.C. (NNPA) – George Zimmerman, the former neighborhood watch-man who shot and killed Trayvon Martin, an unarmed Black teenager in Sanford, Fla., three years ago was involved in another shooting in the Sunshine State, again raises questions about concealed carry permits and the billion-dollar gun industry that advocates for legislation aimed at making it easier for Americans to carry firearms everywhere, all of the time.

Matthew Apperson of Winter Springs, Fla., who said that Zimmerman threatened him following a road rage incident last year, claimed that he was acting in self-defense when he fired a single shot through the passenger side window of the truck that Zimmerman was driving.

The dispute with Apperson follows a series of events where Zimmerman has been accused of threatening people with guns. In September 2013, just a few months after Zimmerman was acquitted of second-degree murder, his estranged wife and her father said that Zimmerman threatened them with a gun and in November 2013, Zimmerman’s then-girlfriend accused him of threatening her with a shotgun.

The Orlando Sentinel reported that Don West, Zimmerman’s lawyer, said that his client was armed and but didn’t wave the gun or shoot at anyone during the altercation with Apperson. West added that Zimmerman has a concealed weapons permit and often travels with a gun for protection.

Despite the self-defense claims propped up by the sup-porters of concealed carry laws, the Violence Policy Center (VPC), a nonprofit group that seeks to address gun violence as a public health crisis, concealed carry permits holders are more likely to kill themselves or others during non-self defense events.

The center tracks fatalities associated with concealed carry gun permit holders at ConcealedCarryKillers.org and found that 743 people have been killed, including 17 law enforcement officers.

“In the vast majority of the 561 incidents documented (468, or 83 percent), the concealed carry permit holder either committed suicide (222), has already been convicted (184), perpetrated a murder-suicide (46), or was killed in the incident (16),” stated a press release about the website.

More than 70 people have been killed in Florida alone by concealed carry gun permit holders.

In a press release about ConcealedCarryKillers.org, Kristen Rand, the legislative director of VPC, said that research shows that concealed carry permit holders are involved in murders or suicides far more often than they act in self-defense. Rand added: “The NRA is relentlessly lobbying state and federal lawmakers to allow more concealed handguns in public despite the clear evidence that doing so puts more people in danger.”

MIAMI, FL— The ground-breaking, multi-talented, classy and sassy and always entertaining comedian Sommore is returning to Miami Beach at the Faena Theater Friday and Saturday June 1-2, to host “Sommore’s Chandelier Weekend Takeover” self-produced by Sommore herself, will surely light any room.  […]