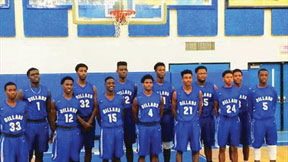 They say that football is the king in South Florida and that statement couldn’t be truer. Football is the sport of choice that collegiate coaches and people in droves gather around to see. For as many great athletes that have emerged from the South Florida area who play football, the community is now starting to see a bit of a shift with their athletics.

The win over Sarasota River-view was the final icing on a wonderful season as Coral Springs finished with an awe-some 22-7 record.

“It’s the most incredible feeling in the world. My alma mater didn’t have much of a basketball history and to take a program that had struggled in the past with no district championships to be here three years later with a state championship proves hard work can pay off,” said Head Coach Devin Barta.

For Coral Springs, they seized the opportunity of getting to the playoffs and making the most of it. Since 2010, they made their third appearance in the regional playoff, but this year they finally accomplished their goal.

For Dillard, making the play-offs isn’t something that’s celebrated, it’s all about winning the entire tournament. This is a proud program and let us not forget who won four consecutive titles from 2000-2003.

This school was built off of athletics and this year for Dillard was no different. In its first trip to the state tournament since 2008, Dillard made sure they didn’t come back to Broward County as losers. Instead, Dillard defeated Largo 66-55 inside of the Lakeland Center to capture the 6A state championship. With the victory, Dillard won the sixth boys basketball championship in school history which is the most by any other school in Broward County.

Additionally, Dillard’s coach Darryl Burrows is as accomplished as any other coach in Broward County. In 23 years Bur-rows has a 536-141 record and has six championship rings.

“I tell them, it’s not the rings. It’s about coming to this tournament and being the last team on the floor in your class. To me that’s probably more then anyone could probably give you because that means for this year you were the very best in your class.”

It’s always about a finish strong and for Blanche Ely, they had to learn that lesson the hard way. Late in the season in January, Ely didn’t look like a state championship contender because of their 12-11 record. Throughout the majority of the regular season they struggled with consistency but somehow this team found their stride during the playoffs, which was the perfect time. This weekend was the finishing touch of a team with absolute determination as they defeated St. Petersburg 84-70 in the 7A State championship game.

For Ely, this also marked the second year in a row which they were the state champions, completing the back-to-back goal.

With this win, Ely also tied Dillard as the winningest school in the county because they too also captured their sixth championship. What was more historic was that this was the first time both schools won state championships in the same year.

“To me, it’s sweeter then the 28-0 season last year due to the fact we had three returning players and 12 new faces…To win, that’s unheard of. It’s un-heard of. To look at the record, as most people say, it was something that wasn’t expected. We always instill that anyone can win on any given night.”

They say that football is the king in South Florida and that statement couldn’t be truer. Football is the sport of choice that collegiate coaches and people in droves gather around to see. For as […]