Congressman speaks of persistence and perseverance at Congressional Black Caucus

Part I of II 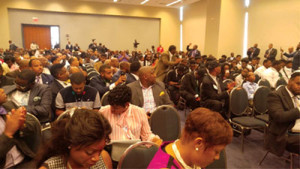 Boone Opened the session by introducing the Forum Host and CBCF member, the Honorable James E. Clyburn. Congressman Clyburn, a member of the Omega Psi Phi Fraternity, Inc., spoke of being awaken one morning with news about University of South Carolina (USC) football player, Tyshun “Deebo” Samuels, a junior and wide-receiver on the football team, who scored on the first play from scrummage.

Samuels will miss most of the season after suffered a fractured left fibula just above his ankle during the third quarter of the 23-13 loss to Kentucky.

Congressman Clyburn then told of Bo Jackson, former NFL player who fractured his hip and which effectively and pre-maturely ended his football career. Jackson was one of the most talented Athletes and football players in the history of the game.

Our charge as Omega men and Black men generally, Clyburn said, in his message of persistence and perseverance, is to prepare these young men to deal with life’s realities for the rest of their lives. “It is our job in these fraternities to pre-pare young men for life,” he said.

Congressman Clyburn mentioned the work of the CBCF and the Clyburn Classic Golf tournament which has involved about 600 golfers. Over the course of the tournament’s history approximately 125 scholarships at $1000 to $4000 plus laptop computers have been awarded to high school and college students.

Clyburn ended his remarks telling of some of the provocative moments of his early career. He cited his first three political failures, first in 1970-1971, 1978, and 1986, but appealed to the audience to “Never Give Up,” he said.

Had he given up and quit the game, he would not have been where he is today – the third most powerful Democrat in the House of Representatives of the United States of America. Quoting the age old saying, he said, “If at once you don’t succeed, try, try again.” He said to the audience excitedly, “Stay in the game. Our society does not move in a linear plane. It moves back and forth – left to right – and right to left – politically and socially.”

He asserted that we can make a difference when we work together and get involved in the process. “The pendulum,” he said, “spends twice as much time in the center than on either side. So, stay in the game but

He related this theme of persistence and perseverance back to the football players and the transient nature of being in the game. Our charge as Omega men and Black men generally, Clyburn said, is to prepare these young men to deal with life’s uncertainties for the rest of their lives. “Yes, they have to be ready” to play sports if that’s what they want to do, but “we must help them prepare for life thereafter,” he said.

Poverty doesn’t have to be a state of mind

Poverty doesn’t have to be a state of mind
[…]