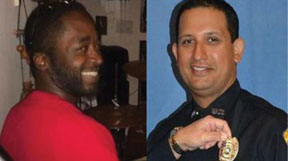 Corey Jones shooting: Officer who shot him a study in contradictions

For years, Nouman Raja’s personal and policing lives have been filled with contradictions.

He told Atlantis police the mentally ill need to be approached with compassion but resorted to fists and Tasers when confronted with psychiatric patients at JFK Medical Center. He never finished a four-year college degree but speaks six languages and until this week, taught courses at Palm Beach State College.

He had a defunct company, IRS liens and a pending foreclosure in 2007, but came back financially by this year, having paid off the back tax bills by 2010 and closed on a $400,000, 2,600-square-foot home this spring. He got high marks for professionalism by supervisors while on the Atlantis police force, but botched two criminal cases.

He expressed concern about using deadly force in the line of duty, but went to work with large knives strapped to his uniform, according to a person who knows him but asked not to be identified.

And he was praised for teaching others in law enforcement how to safely handle risky traffic stops, but last week shot and killed Corey Jones as the 31-year old waited on a high-way ramp for a tow truck.

Jones’ vehicle broke down early Sunday on the south-bound off ramp of PGA Boulevard and Interstate 95. Raja pulled up in an unmarked white van with tinted windows at about 3:15 a.m., Jones’ family attorney, Benjamin Crump, said.

Raja was wearing jeans, a T-shirt and a baseball cap when he got out of the van without his badge, said Crump, who spoke after a briefing with State Attorney Dave Aronberg.

Raja, who has received death threats, did not respond to calls for comment. The BlackDove Group, a Tequesta-based firearms company, quickly removed its Facebook page from public view after inquiries from The Palm Beach Post about photos linking Raja to the firm.

At Palm Beach State College, where he was slated to teach four courses at the law enforcement academy this semester, Raja is now on paid administrative leave, pending the college’s review of circumstances surrounding the shooting, “or the conclusion of your current teaching assignments, whichever occurs first.”

Though his grandfather was a police chief in Pakistan, Raja, a naturalized citizen since 2001, didn’t immediately seem headed for a career in law enforcement.

Raja said he smoked pot once, in the summer of 1995, and got busted with his fellow high school seniors the same year after blocking the Mechanicsburg, Pa., senior high school parking lot with cinder blocks. Problems with car insurance cost him a brief license suspension in New York.

After high school, he worked at motorcycle sales and repair shop, installed security systems and briefly worked in sales at Al Packer Ford in Palm Beach County. But in late 2007, he quit his job at a Jiffy Lube in Delray Beach to concentrate on his studies. He was enrolled, along with his brother, at the Palm Beach State College police academy.

By then, Raja had encountered significant financial problems. Two small Boynton Beach businesses he co-owned had folded, according to corporate records, and the IRS filed to collect just under $10,000 in back business taxes from Raja. He faced foreclosure on a condo and was considering filing for bankruptcy.

After he was hired in 2008 by the Atlantis Police Department, though, the adverse financial court filings subsided.

Raja came to Atlantis with definite ideas of what kind of officer he wanted to be. And he seemed to be a good fit for the gated town of 1,200, with its large numbers of retirees and people seeking treatment at JFK.

He had taken care of his father and mother, both heart patients, he told interviewers, so he was respectful of the elderly. When dealing with the mentally ill, he said, it was important to be compassionate, and not take their actions personally.

He believed his biggest weakness would be perfectionism — it kept him from finishing tasks quickly.

Asked about tactics, he easily recited the escalating response officers are expected to use: establishing a commanding presence first; then verbal commands. If those do not work, an officer may use physical force, and if that does not work, an officer can use non-lethal force, such as firing a stun gun. Finally, if all else fails, deadly force is authorized.

Raja hoped he would never have to shoot someone, he told interviewers, but if necessary, he “would not hesitate.”

His first few years on the Atlantis force brought praise from superiors. In 2010, for instance, the director of the FBI’s Terrorist Screening Center commended him for alerting the agency to a possible terrorist. In 2012, an FDLE course evaluator observing Raja teaching bias-based profiling and handling high-risk traffic stops gave him top marks. In 2014, Raja was promoted to sergeant.

But Raja did not always follow policy. In 2011, he stopped a driver who parked in the JFK Medical Center parking lot, then sped away, forcing pedestrians to jump out of the car’s path. Police pursuits are dangerous, and Raja already had identified the driver, so a pursuit wasn’t necessarily warranted. But he hopped in his patrol car and went after the driver anyway, a violation of department policies.

Two other significant incidents followed. In one, Raja wrote up a patient at JFK after narcotics were found in her possession. But Raja didn’t file a case with prosecutors or turn in the drugs to the department as evidence.

Raja turned over the pills and finished the report after the department confronted him about the missing casework.

However, while going through Raja’s inbox looking for the narcotics case paperwork, the police chief found two other reports not filed with the state attorney for prosecution, including the case of a battery on a hospital employee. Raja’s actions botched any chance of bringing charges in either the battery or the narcotics case.

“Officer Raja was derelict in the performance of his duties,” an investigation concluded. He received a written reprimand, and was warned another such incident could result in a suspension.

At JFK Medical Center, Raja racked up a string of at least 14 “use-of-force” incidents in two years, almost all involving mentally ill patients.

Raja, he said, had a reputation for freely wielding stun guns — and he would sometimes appear at the hospital wearing one of his knives.

In January 2014, a kicking, flailing woman bit Raja’s finger. She did not let go. He slugged her.

Three months later, a 37-year-old Lake Worth woman was brought to the ER to be involuntarily admitted to the hospital’s psychiatric unit.

Raja caught her after she made it to the other side of Congress. Another police officer followed, where he heard Raja yelling for the woman to stop. Then, writes the officer in a report, “She went to the ground.” On her back, she kicked Raja twice in the face, according to the report, and was attempting to kick him again when he slugged her, twice, near her eye.

Raja was uninjured. The woman was admitted to the jail with one eye swollen shut, her booking photo shows. She was charged with battery on a law enforcement officer.

In another incident, a 24-year-old Colorado man refused to get into his hospital bed. After Raja, another officer and medical staff moved him onto the bed; the psychiatric patient began taking swings. Raja Tasered him once, in the stomach.

The man knocked Raja’s arm away. Raja stunned him again under the left arm, then, after five seconds, Tasered him three more times in the same place.

A photo attached to the report shows a wound below the left arm.

In 2010, a 70-year-old woman in a red Toyota minivan parked sideways in the hospital parking lot. An officer called for backup after she said the elderly woman tried to run her over.

Raja and another officer approached the parked car. The woman refused to open the door. They banged on the window. She opened the door but clenched her hands around the steering wheel.

Raja unholstered his Taser, turned it on and pointed it at her, ordering her out of the minivan, according to an Atlantis police report. She stayed put. He grabbed her arm and pulled her to the ground using a “modified” arm locking technique and handcuffed her.

She was charged with aggravated assault on a law enforcement officer, according to the report.

Raja’s Atlantis personnel file showed no indication superiors found fault with those or any other incidents.

Raja left Atlantis in April to take a job with the Palm Beach Gardens Police Department, a job that came with a roughly $10,000-a-year pay cut.

He remains on administrative leave from both jobs pending completion of the Palm Beach County Sheriff’s office’s probe into the Jones shooting.