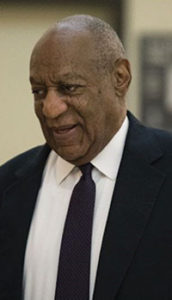 A source who can only be identified as a ‘neutral’ Montgomery County Court official claims a tape played in court that helped convict Bill Cosby was either doctored or partly erased and the original recording contained information that would exonerate the comedian.

“No one in the media, no one on the defense really has either asked me or pressed me or, to my knowledge, anyone else about the tape,” said the individual, who has requested anonymity because identification could lead to employment loss and other sanctions.

The recording in question aired during Cosby’s trial in April before a jury found him guilty of three counts of aggravated indecent assault for providing Benadryl tablets to former Temple University employee Andrea Constand and then engaging in foreplay where he touched her under her pants and she touched his penis.

“What did you give my daughter? I know my daughter ….,” Gianna Constand, Andrea’s mother, said in a decades-old conversation with Cosby.

However, a source said what’s been omitted from the tape could prove Cosby’s innocence.

“What’s not on the tape are two things. It was not what’s been reported that this is some angry person,” the source said.

“She said, ‘Look Bill, I know my daughter, and something is wrong with my daughter. Bill, I have to tell you something, what did you give my daughter?’”

While that might sound consistent to the recording played inside the Montgomery County Courthouse in Pennsylvania, the source said here’s where the change or omission occurred.

“Mr. Cosby said to her, asked her point blank, ‘Are you accusing me of date rape?’ Mr. Cosby was incredulous because he knew, and Gianna knew that he and Andrea’s relationship was consensual,” the source said.

“She said no, she wasn’t accusing him of date rape, but then you get to see her real motivation which was money because she said to him, ‘Bill, things are tough, I don’t know how I’m going to make it’ — and this is a married woman saying this so Mr. Cosby — just goes on to apologize for having the relationship with her daughter and she told him that his apology was enough and that she didn’t want anything else.”

When Cosby overheard a noise on the phone, he asked Constand whether he was being recorded and she denied she was recording saying that the sound was her pet parrot.

Testimony revealed that even while Constand surreptitiously recorded Cosby, she had already first searched for a civil lawyer and then called police.

“They ran out of money and this was a way of them getting money and Gianna Constand hated Blacks,” said Robert Russell, a former friend of the Constand family whose potential bombshell testimony was not allowed by Judge Steven T. O’Neill.

Russell said he was prepared to testify that Andrea Constand, at her mother’s direction, plotted to extort Cosby, who eventually settled a civil suit with Constand for $3.4 million.

Throughout the trial, those not in the courtroom were provided the mainstream media’s version of the tape, which many neutral observers said included so much bias that they believed the media worked in concert with prosecutors to convict Cosby and decimate his legacy.

For instance, it was widely reported in headlines and leads that “Cosby admits being a dirty old man.”

However, the tape clearly reveals Cosby saying, “I don’t want you to think that I’m a dirty old man.”

Another gentlemen at the Panera Bread on 12th and Arch Street agreed.

“I’m not sure what to make of the reporting by [mainstream media] but I do know something was amiss. It just sounded pro-prosecution from the beginning and, as it turned out, they were intent on destroying Cosby and his legacy and it’s another shot at Black people in this era of Donald Trump,” said Archie Crenshaw of Delaware County.

Famed forensic psychiatrist Carole Lieberman, who has years of experience in hundreds of civil and criminal trials, said it’s appalling to discover – after Cosby’s conviction – that Gianna Constand may have doctored or left out parts of the recording that could have changed the face of the trial.

“To be honest, I always suspected that there was something off with his accuser and her story. The defense obviously did not do a good enough job for Cosby despite the hundreds of thousands they were paid,” Lieberman said.

tell that it was doctored. This is done on a routine basis in cases where tapes are involved,” she said.

Lieberman said even though Cosby is set to be sentenced on Sept. 25, it’s still not too late to right the wrong.

“First, the court should order that the tape be analyzed. If it is doctored, then a mistrial should be declared, and his conviction should be thrown out,” Lieberman said.

“The prosecutors should be reprimanded, and the defense attorneys should return the fees Cosby paid them. Otherwise, they should be sued for malpractice. If his conviction isn’t thrown out, he can appeal on the basis of ineffective representation by counsel,” she said.

Before the start of Cosby’s sexual assault trail, at least one juror says he’s guilty

Attorneys representing Bill Cosby are trying to convince Judge Steven O’Neill to dismiss a newly-minted juror, because he proclaimed that the comedian is guilty. […]