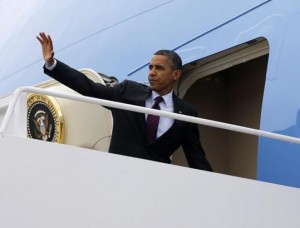 Democrats open their national convention Tuesday offering President Barack Obama as America’s best chance to revive the ragged U.S. economy and asking voters to be patient with incomplete results so far. Michelle Obama, in her opening-night speech, aims to give people a very personal reminder of “the man that he was before he was president.”

“The truth is that he has grown so much, but in terms of his core character and value, that has not been changed at all,” Mrs. Obama said in interview airing on SiriusXM’s “The Joe Madison Show.”

The three-day convention has drawn thousands of delegates to a state Obama narrowly carried in 2008. And although Obama no longer is the fresh-faced newbie who leveraged a short Senate career into an audacious run for the nation’s highest office, he still can excite partisans, and Democrats were counting on massive numbers to pack a stadium for his speech later in the week.

Virginia Sen. Mark Warner and a host of Democratic allies worked to rev up delegate enthusiasm, saying Obama has a strong record to defend. They noted the president had helped the economy rebound, presided over an increase in the stock market and brought troops home from Iraq and Afghanistan.

“We’ve got some truth telling to do,” Warner told Florida delegates at a breakfast meeting. “America is better off today than it was four years ago when this president took over.”

Newark, N.J., Mayor Cory Booker told the delegates Democrats need to get fully behind Obama, comparing the differences between a large voter turnout in his home state during the 2008 election and a more modest outpouring one year later, when his home state elected Republican Chris Christie as governor.

“Change is never made in a sedentary position,” he said.

The Democrats dispatched U.S. Senate candidate Elizabeth Warren, who hopes to unseat Republican Scott Brown in Massachusetts, to make the case for Obama on morning talk shows, and she acknowledged that “it’s tough out there” for many Americans.

U.S. factory activity shrank for the third straight month in August and construction spending fell in July from June by the largest amount in a year. Next up: The Labor Department will release new jobs numbers Friday. Economists expect to see some job gains but believe the unemployment rate will remain at 8.3 percent.

Warren was up against GOP vice presidential candidate Paul Ryan, the Wisconsin congressman, who held out the millions of people who are struggling to find work as an indictment of the president’s first term.

“Four years into a presidency and it’s incomplete?” he asked in a round of morning television interviews. “The president is asking people just to be patient with him?”

GOP nominee Mitt Romney’s campaign reinforced that message with a new Web video answering Obama’s statement that “there are always going to be bumps on the road to recovery.” The new video showcases a series of ordinary people who’ve lost their jobs saying, “I’m an American, not a bump in the road.”

Romney, his convention behind him, drove from his vacation home in New Hampshire to the Vermont home of former Massachusetts Lt. Gov. Kerry Healey to spend the day preparing for the fall debates with Obama.

Democrats released a party platform for ratification Tuesday that echoes Obama’s call for higher taxes on the wealthy and reflects his shift on gay marriage by supporting it explicitly.

In a nod to dissenters on gay marriage, the platform expresses support for “the freedom of churches and religious entities to decide how to administer marriage as a religious sacrament without government interference.”

As with the deeply conservative Republican platform, not all of which Romney endorses, nothing binds Obama to the specifics of the party’s manifesto.

The president rallies in Virginia on Tuesday before joining the convention a day later.

Michelle Obama said she wants to use her opening speech to “remind people about the values that drive my husband to do what he has done and what he is going to do for the next four years. I am going to take folks back to the man he was before he was president.”

San Antonio Mayor Julian Castro delivers the convention’s keynote address Tuesday night, a nod to the importance of Hispanic voters in the race.

“Under any score — immigration, education, health care — in any number of issues, he has been a very effective advocate for the Latino community,” Castro said of Obama during an interview on CNN.

With flourishes but no suspense, Democrats will march through the roll call of states renominating Obama for president and Joe Biden for vice president on Wednesday.

That’s also when the convention hears from Bill Clinton, whose 1990s presidency is being trumpeted by Democrats as the last great period of economic growth and balanced budgets — a further redemption of sorts, at least from his party, for a leader who survived impeachment over sexual scandal.

Obama’s big acceptance speech is Thursday, and Democrats are closely monitoring the weather forecast since he’s scheduled to speak outdoors at Bank of America stadium.

Obama campaign manager Jim Messina said Tuesday during a panel discussion with ABC News and Yahoo! News that the president’s speech would be held outdoors “rain or shine” — unless the weather would put people at risk.

The Democrats were working to leverage the impact of the convention with events around the country. Obama, in an email to supporters, said actor Kal Penn — who worked in Obama’s White House — would host a special online program before Thursday night’s convention speech featuring special guests and interviews with Mrs. Obama and Biden.

As part of that effort to reach beyond the convention hall, the first lady will present the Top 10 List on David Letterman’s show Wednesday night.

Obama came out with a campaign commercial asserting that, under Romney, “a middle-class family will pay an average of up to $2,000 more a year in taxes, while at the same time giving multimillionaires like himself a $250,000 tax cut.” Aides said it would be seen in Colorado, Iowa, New Hampshire, Nevada, Ohio and Virginia, the battleground states where the White House race is likely to be decided.

The president and aides have acknowledged for weeks that they and the groups supporting them are likely to be outspent by Romney, and recent figures say that has been the case in television advertising in the battleground states for much of the past two months.

Democrats chose North Carolina for their convention to demonstrate their determination to contest it in the fall campaign. Obama carried North Carolina by 14,000 votes in 2008, but faces a tough challenge this time given statewide unemployment of 9.6 percent, higher than the vexing national rate of 8.3 percent.

WASHINGTON — President Barack Obama‘s campaign and Democrats have raised $181 million combined in September, pulling in the most money in one month during his re-election bid. Obama’s fundraising haul topped the more than $114 million raised by his campaign […]

Democrats could lose even more in 2018

Democrats could lose even more in 2018