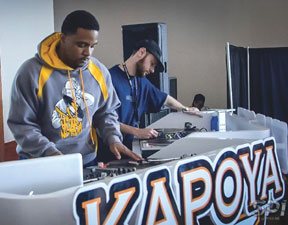 DJ Hear No Evil recently was in South Florida to perform during Miami’s “Winter Music Conference” in their prestigious” DJ Battle/Competition.”

It’s not unusual in today’s society to hear young people talking about being the next big superstar, whether it be LeBron James, Nicki Minaj, Chris Brown, or Kanye West. Quite frankly, there are as many aspiring Hip Hop artists, as there is sand on the beach. What makes one young man’s quest for stardom in the entertainment so unique is that he is able to compete in a world that he can barely hear.

There are literally thousands upon thousands of DJ’s who share the same dream as Anton Abraham aka DJ Hear No Evil, who since the age of three, has essentially been unable to hear in one ear and barely able to hear in the other. He attributes his hearing impairment to being exposed to loud music as a young child.

Abraham grew up in Mount Vernon, N.Y. He says it was quite difficult adjusting to a hearing family and friends. He is able to read lips and has a speech impediment but has come far toward accomplishing his goals in life.

“Yes I am hard of hearing, but I can in fact feel, and play music like the rest of them…like the BEST of them. At a very young age, I had to learn how to acclimate to the hearing world and I’m still learning to-day,” said 27-year-old Abraham aka DJ Hear No Evil.

“To no surprise, music is one of my instructors. I am drawing closer and closer to my dream of becoming one of the greatest DJs to have ever lived,” added Abraham.

Abraham has embarked on this journey since the age of 13; however, some of the steps he has taken in pursuit of his goals in life include obtaining a Bachelor of Science Degree in Media Marketing and Master’s Certifications in DJ and Production.

After the death of his biggest supporters, his dad Antonio Leo Abraham aka DJ LA, and his best friend, Christopher Alexander Rucker-Ridley who was a Mount Vernon police officer, he was inspired to become a DJ. Both Ridley and Abraham became interested in music because of their fathers.

“I am left to achieve this dream for all of us. Music is my life, and currently my wife…so you can sense my determination. I am fully aware of my impediment, yet I am determined to succeed in becoming one of the greatest. The reason why I’m doing this is because I am unique and can actually spin like DJ Jazzy Jeff, Kid Capri, DJ Sussone and few others.”

I have DJ’ed in several battles. I obtained second place in Manhattan, and came close to making it in the final round in Queens recently. In my case, I realize that I have to work 100 times harder and I have a long way to go but I’m putting in the work,” added Abraham.

Several weeks ago Abraham performed a showcase at the SXSW Concert in Texas, considered one of the most influential outdoor concert events in the U.S. Most recently Abraham came to South Florida to compete at the Miami Winter Music Conference, in its prestigious ,”DJ Battle/Competition.” This achievement will position him in the industry as a relevant up and coming DJ/artist. He also will be featured in a documentary of his quest toward stardom.

DJ Hear No Evil recently visited South Florida and a-greed to share his experiences with the Westside Gazette.

WG: How did you get started as a DJ and trace your most difficult moments in your journey to becoming a professional DJ and also share your proudest moment so far in your career?

WG: How has HIP HOP/music changed since you first began listening to this art form, and do you feel it has become too commercial over the years?

DJ Hear No Evil: Nowa-days, hip-hop has become more about hot beats and who can make the most money. The days when hip-hop and rap was about representing the com-munity where it came from are fading but some rappers are trying to bring it back. The way I look at it, is nobody really cares about quality or real life issues anymore. Some of the old heads are still in the game trying to teach the youngin’s how to stay in the game and not screw up Hip-Hop. There are still good rappers out there, such as Lupe Fiasco, J. Cole, Kendrick Lamar, and Drake. I still like some good hip-hop songs and I respect every artist’s hustle but I want them to bring Hip Hop back to real life.

As Nas said, “Everybody sounds the same, commercialize the game, Reminiscin’ when it wasn’t all business. It forgot where it started. So we all gather here for the dearly departed.” This defies why true Hip Hop is dead.

WG: What advice would you give to aspiring DJ’s ?

WG: What does the future hold for you and where do you go from here?

Beyond survival: Life after rape

Beyond survival: Life after rape
[…]

Pitfalls to avoid when making a student loan

Pitfalls to avoid when making a student loan
[…]