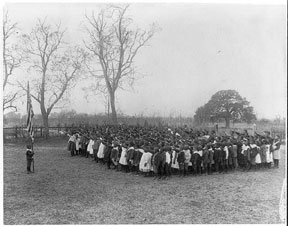 Did you know Memorial Day was started by ex-slaves?

One of the things that most Black people know is that the public school system does a horrible job teaching Black History. They will gladly tell you all the wonderful things that white people did and maybe even go back to Europe, but the contributions of African Americans are kept entirely on the backburner.

A fact that you should probably know is that African Americans are the reason that Memorial Day even exists in the first place. According to Professor David Blight of Yale University, the event began on May 1, 1865. A group of former slaves in Charleston, S.C. gave a proper burial to 257 Union soldiers who’d been put into a mass grave.

The Black community of Charleston then consecrated the new cemetary with “an unforgettable parade of 10,000 people.”  The event was initially called “Decoration Day” and was led by 3,000 Black school children who started off by singing the song “John Brown’s Body.”  They were then followed by hundreds of Black women with baskets of flowers and crosses.  After that, Black men marched behind them in cadence, followed by Union infantry.

The Union soldiers lived in horrible conditions, and 257 of them died from exposure and disease.  This was the reason for the creation of the mass grave site.  A total of 28 Black men went to the site a re-buried the men properly, largely as a thank you for helping fight for their freedom.

They also built a fence around the cemetery, and on the outside, put the words, “Martyrs of the Race Course.”

Dr. Boyce Watkins, who created an online course based on a forum held with Minister Louis Farrakhan last month, says that this is simply the tip of the iceberg.  He says that misinformation is one of the most storied weapons used to perpetuate the oppression of Black people.

“Black people must, as part of our healing, go back and rewrite history to ensure that we learn the truth,” said Dr. Watkins. “You’ve been lied to for your entire life, so it is up to all of us to use the Internet as a critical resource in helping us to learn who we truly are.  We are great people and America would not be the country that it is today without our sacrifice.”

Now you know the rest of the story.  Go tell this one to everyone you know.