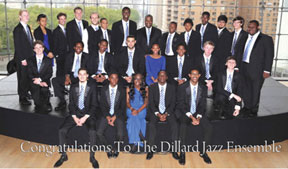 Dillard Center for the Arts finished in the top three at the 19th Annual Essentially Ellington High School Jazz Band Competition & Festival at the Lincoln Center in New York City, May 8-10, 2014. This is the fifth consecutive year that the jazz band has made the national cut as finalist, to compete among the best of the best from more than 100 schools bands from across the country.

Dillard was one of the top three bands chosen from the field of 15 finalists to perform on Saturday evening during performances at Frederick P. Rose Hall at the Lincoln Center. The winning bands were chosen by a panel of judges composed of distinguished jazz musicians and historians, including Jazz at Lincoln Center’s Artistic Director Wynton Marsalis. The competition was the culminating event during three days of mentoring, jam sessions and workshops.

At an awards ceremony following the performances, Wynton Marsalis presented prizes and cash awards to each of the 15 finalist bands. Christopher Dorsey, director of the Dillard Center for the Arts Jazz Band accepted the third place trophy and award of $1,000 for the school.