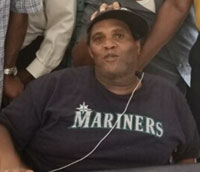 It’s safe to say that Charles “Cartoon” Lane will forever rest on his laurels.

Lane, a 1972 graduate and former all-state linebacker for the Panthers, was always publicized as one of the fiercest defensive players ever. His unrelenting play helped transform Dillard into one of the state’s top defensive teams in the early ‘70s.

“He was an icon,” said Herman Lovett, who played with Lane at Dillard. “No doubt about it.

Players who can impact a defense or offense are called game changers. In football, players like Lawrence Taylor, Khalil Mack and Von Miller are considered game changers on defense.

Lane was Dillard’s game changer, according to Lovett.

Lovett recalled numerous times how Lane would come up with a big hit to force a turnover or defensive stop. That’s why he described Lane as a cut above the rest.

“His ability to hit is what separated him from others,’’ Lovett said. “He was a hard hitter and he rarely missed tackles.

“He was the type that if he hit you, you were going to be stopped. He was a devastating hitter.”

Shaking in their cleats

“He was somebody that every running back feared,” Wayne Miller said of Lane. “He was a notorious hitter and was relentless in his pursuit of the ball carrier.

“He was an all-world linebacker. He was one of the best to ever come through Broward County.”

Miller, a 1972 graduate of Fort Lauderdale High School, was a first team All-County selection on defense with Lane. Miller recalled how teams were always more concerned about Dillard’s defense than the offense because of standouts like Pressley and Lane, who happened to be the two best linebackers in the county.

“Oh yeah, Toon would hit you,” Carter said smiling. “He’d hit you with everything he’s got.

“I believe he had some bricks in his pocket or something . . . as hard as he’d hit you.

He was always full of energy. He had a good spirit about him and could make you laugh.”

The heart of a Lion

Lane’s opportunities to continue playing after high school came to abrupt end almost two years out of high school. He was robbed and shot, which left him paralyzed from the waist down. Lane, confined to a wheelchair, endured other health problems as the years progressed. It included being a double amputee (legs).

Lovett and his wife (Jackie) have been Lane’s caretakers for years.

“Cartoon has had about 12 operations,” Lovett said. “But he never complained.

“He’s one of the toughest guys I’ve ever known. I’ve never seen anyone handle adversity and suffering the way he handled it.”