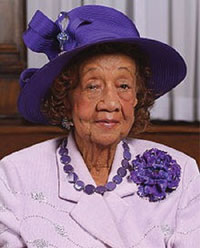 Do you know Dorothy Height?

Height was a historic luminary in American history.  At the age of 25, she began a career as a civil rights activist, joining the National Council of Negro Women. She fought for equal rights for both African Americans and women.

In 1944, she joined the national staff of the YWCA.

She was also an active member of Delta Sigma Theta sorority throughout her life, developing leadership training programs and ecumenical education programs.

She was initiated at Rho Chapter at Columbia University, and served as national president of the sorority from 1947 to 1956.

Ms. Height was extremely frustrated by the ubiquitous layer of racism. After meeting Mary McLeod Bethune, founder and president of the National Council of Negro Women, Bethune became Height’s mentor. The two worked closely together until Bethune’s death in 1955.  In 1957, Height was named president of the National Council of Negro Women, a position she held until 1997. During the 1960’s Civil Rights Movement she organized “Wednesdays in Mississippi,”[8] which brought together Black and white women from the North and South to create a dialogue of understanding. Ms. Height was also a founding member of the Council for United Civil Rights Leadership. In his autobiography, civil rights leader James Farmer described Height as one of the “Big Six” of the Civil Rights Movement, but noted that her role was frequently ignored by the press due to sexism.