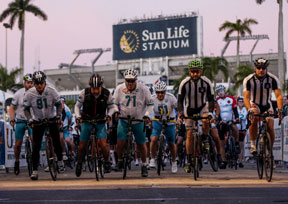 “The fifth Dolphins Cycling Challenge was an enormous success thanks to the Miami Dolphins and our partner in UM. A big thank you to all who rode, ran, walked, volunteered or donated.”

From Theresa Manahan and Michael Farnham,

MIAMI, FL – The Miami Dolphins and the University of Miami (UM) Miller School of Medicine capped another successful Dolphins Cycling Challenge (DCC) this weekend. The fifth edition of this annual community endeavor boasted nearly 3,000 participants who cycled, ran, walked, volunteered and donated throughout all of South Florida with a goal to tackle cancer. A special edition of the Dolphins Ride from Doctor’s Hospital Training Facility included DT Anthony Johnson singing the national anthem.

“We are thrilled with the results of DCC V. In addition to raising a record amount of money for Sylvester Comprehensive Cancer Center (SCCC), we brought the message to a broad range of people in all three counties,” said DCC V Chair Richard Berkowitz. “I have been honored to lead the event this year and I’m confident next year’s Chair Tom Garfinkel will build upon the momentum we have created. Thank you to all of our returning and new sponsors and teams. We look forward to seeing everyone next February for DCC VI.”

The major community initiative continued its journey and dedication to improving people’s lives through the financial support of innovative cancer research at SCCC. Due to the generosity of corporate partners, 100 percent of rider-raised funds go directly to Sylvester. Funds are still being collected through Feb. 28.

“The Dolphins Cycling Challenge has made an enormous difference in the fight against cancer,” UM SCCC Director Dr. Stephen D. Nimer said. “All of us at Sylvester are humbled and proud to benefit so profoundly from the funds raised by the DCC. Every dollar raised by riders funds cancer research right here at Sylvester. We are so very grateful to every rider, donor, volunteer and sponsor — all of whom have helped bring us closer to a world without cancer.”

“What an amazing weekend. I am continually inspired by the commitment of the South Florida community to cancer re-search,” Mandich said. “The fifth Dolphins Cycling Challenge was an enormous success thanks to the Miami Dolphins and our partner in UM. A big thank you to all who rode, ran, walked, volunteered or donated.”