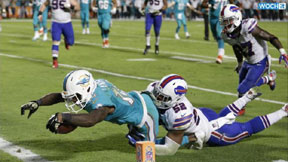 Miami Dolphins WR # Landry dives into the end zone for a touchdown in the fourth quarter in their 22-9 victory over the Buffalo Bills on Thursday, Nov. 13, 2014.

Miami Dolphins rookie receiver Jarvis Landry dived into the end zone for a fourth-quarter touchdown, he was just getting started. A replay review upheld the score, and Landry then sprinted up and down the sideline in a celebration of redemption. Landry bounced back from a potentially disastrous fumble, and the Dolphins ended a streak of three consecutive losses to Buffalo, in a third-quarter deficit to win 22-9.

Miami trailed 9-3 before outscoring their AFC East Buffalo Bill rivals’ 19-0 in the final 18 minutes. The Dolphins improved to 6-4, their best record after 10 games since 2008.

The Dolphins scored one touchdown in 33 possessions against the Bills before late drives of 80 and 63 yards. That was quite a rally by a team that hadn’t won a close game all season. Dolphin’s defense did the heavy lifting for Miami which scored a safety on a penalty. Quarterback Kyle Orton had an unproductive night and injured a toe late in the game.

The Bills, ranked last in the NFL in red-zone touchdown efficiency, mounted grinding drives of 67 and 85 yards on their first two possessions. But Miami held them to a field goal each time, which were their best TD chances throughout the game. The Bills had only reached the end zone once in their past nine red-zone trips. With the Dolphins leading 12-9, Landry lost a fumble on a kick return, but their defense again dug in, and Bills’ kicker Dan Carpenter missed a 47-yard field goal attempt. He made field goals of 33, 21 and 46 yards.

The Dolphins ranked poorly in red-zone efficiency, missing several chances earlier in the game. They came away with only three points from trips inside the 20 on their first two possessions, and didn’t reach the end zone until late in the game.

Miami led 10-9 before scoring a safety when Kyle Orton was flagged for intentional grounding in the end zone. The Bills padded their NFL-leading sack total while working against Miami’s offensive line, revamped after left tackle Branden Albert’s season-ending knee injury last week. Tannehill finished with a passer rating of 114.8.

The Dolphins haven’t allow-ed a touchdown in their past two home games.