After Sunday’s loss the Dolphins are now 0-5. Washington was also winless coming into the game, and now they get their first win of the season. The Dolphins and Bengals are the only winless teams remaining. The game was close and the win was right there on the silver platter, but Dolphins found a way to let it slip away in the end. 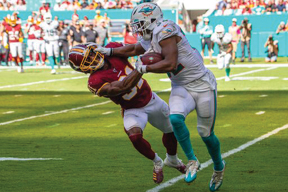 Josh Rosen started under center for Miami and it was a performance to forget. The protection was not very good, and Rosen was only able to throw for 85 yards and two interceptions. The Redskins defensive linemen were able to get pressure on Rosen sacking him five times. If the Dolphins want to have success they have to protect the quarterback; they can’t give up five sacks. The only score for Miami in the first half was a field goal, making the score  7 to 3 at halftime. In the third quarter Ryan Fitzpatrick replaced Rosen. This move seemed to give the offense a jolt as Fitz came in and the Dolphins scored. He was 12 for 18 with 132 yards and a touchdown. The run game worked really well for the Redskins. Adrian Peterson rushed for 118 yards, while Miami’s three running backs -Kenyan Drake, Mark Walton, and Kalen Ballage – rushed for 79 yards combined. Although Miami’s defense gave up 118 yards rushing to one player, they did not allow him to score. 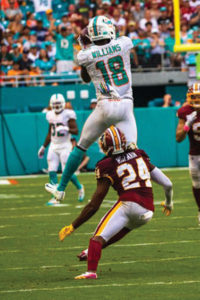 Case Keenum, overall, was decent, going 13/25 with 166 yards and 2 touchdowns. With the running game working well there wasn’t much need to pass. Their offensive line was able to open lanes for Peterson while also giving Keenum time to throw, allowing no sacks this game. Although Washington got the win, Dolphins lost the game more than Washington won it. Late in the fourth, Dolphins made it a one-point game. Wanting to go for the win, Brian Flores decided to go for two instead of kicking the extra point and going into overtime. I can respect the decision to go for it, but I didn’t like the play call. Brian Flores still stands by his decision. “We were trying to win the game, pretty much. We talked about it. We felt good about the play. It’s something we worked on all week. We thought we had an opportunity to win the game, and that was the thought process there. They made a good play. They were ready to go on it, but we’re going to try to win the game in that situation with the amount of time left.” Running back Kenyan Drake was also behind his decision. “I respect it. I love it. I want to be in the situation to win the game each and every time. We know he has the utmost faith in his offense and the ability to go out there and call a play, run it, and execute it and make a play.” Their next game is a road division and rivalry game against the Bills. With the way their offense struggled in the first half, they will struggle against a tough Bills defense. It looks as if Rosen will be the starter, the offensive line has to find a way to protect him or they’re in for a long game. Let’s see if

Miami can get their first win or will they continue this downward spiral.

Cheap Xanax Overnight Delivery   On a cold, wintry Sunday afternoon in Green Bay, the Dolphins could not escape with a victory. At no point in the game could the Dolphins grab a lead nor score a touchdown. The final score was 31 to 12. […]

Dolphins Fall 0-4 against the Chargers

With this Sunday’s lost, the Dolphins now fall to 0-4 for the season. The Chargers came into the game at 1-2, which gave the Dolphins a chance to get their first win of the season.  It was a close first half, but then all hell broke loose in the second half. […]