Sunday was the sight for an old rivalry between two teams who hate each other. The Dolphins and Jets have been rivals and bitter enemies since about 1966. Overall, they have met 107 times with the Jets leading 54 to 52, and one tie. However, the Dolphins have more post season success with more super bowl appearances and wins than the Jets. The Dolphins have 5 appearances with two wins while the Jets have one appearance and one win. There is no love lost between these two as they will forever be rivals. Adam Gase is now the Jets head coach and he would have loved to get a win against his former team.

The Jets came into Sunday’s game 1-6, and even though the Dolphins were 0-7, there was no way they were going to let the Jets come into their house and beat them. The Dolphins got off to a good start, having a 21 to 12 lead at halftime. This is head coach Brian Flores first win this season, and it was against a rival. How does it feel coach? 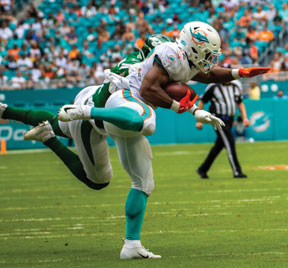 “It feels good. The first thing I would say is players win games. We coach them but players win games,” he says. “That group, they did a really nice job today. We didn’t get off to the best start; but like all year, we’ve dealt with a lot of adversity and these guys know how to deal with that and they came back, and we played well after that slow start.”

Under center for the Phins was Ryan Fitzpatrick. He had a good game with 288 passing yards, completing 67% of his passes (24 for 36), and 3 touchdown passes with no interceptions. Even though they won the running game could’ve been better, managing only 48 rushing yards between their two running backs and no rushing touchdowns. The Jets had a better running game with a total of 82 rushing yards between their two running backs. Their passing was decent with Sam Darnold completing 27 of 36 passes, 260 passing yards, 1 touchdown and an interception. It was a close game, and Jets could have tied the game if they had better clock management towards the end. Fitzpatrick has been playing better since the beginning of the season so what is different? “I think overall we’ve just been a little more consistent. The communication is a little bit better. We have gotten in a good flow Wednesday, Thursday, Friday, of putting the game plans together and getting guys to really buy in and it’s nice to do that and then to see things work on Sunday the way that (Head) Coach (Brian Flores) put it in or the way that a coach saw it,” He says. “That’s been nice for us, and I think just the fact that everybody  still bought in and there’s not feelings of guys hanging their head or moping – everybody’s coming to work trying to win – that’s been a nice push in the right direction for us.” 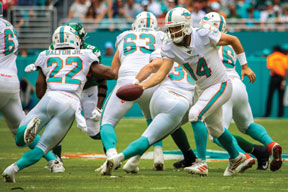 This win feels good because it looks like history will repeat itself. The last time Dolphins went 1-15, they bounced back huge the next season going 11-5, making the playoffs. The next game is a tough road game against the Colts:, will they be able to ride the momentum and get another win or finish 1-15? We’ll soon find out.