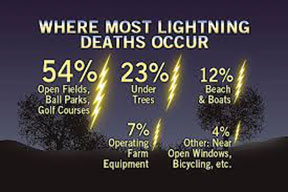 Don’t become a statistic this summer

BROWARD COUNTY, FL — Saturday marks the end of the National Weather Service’s National Lightning Safety Awareness Week, but the danger of lightning strikes in South Florida will continue throughout the summer.

Did you know that Florida is known as the lightning capital of the United States? On average, the state receives nearly 1.4 million cloud-to-ground lightning strikes per year. This averages out to 21 flashes per square mile and the National Weather Service reports Broward County’s average is higher – between 20 and 30 cloud-to-ground lightning strikes. That means, on any given day, any part of Broward County can receive as many as 30 strikes per square mile.

What’s even more concerning is that, from 2005 to 2013, Broward County recorded six lightning fatalities, making it the second highest county in the state for lightning deaths, behind Lee County. Fifteen people suffered injuries from lightning strikes.

What’s even more concerning is that, from 2005 to 2013, Broward County recorded six lightning fatalities, making it the second highest county in the state for lightning deaths, behind Lee County. Fifteen people suffered injuries from lightning strikes.

Although lightning is a year-round threat in Florida, most victims are injured or killed during the summer months of June through August. This is due to the combination of Florida’s nearly daily thunderstorm activity and the plethora of outdoor activities held during this time in which children are out of school and families are vacationing.

Perhaps one of the greatest contributors to lightning fatalities is the misconception that if it is not raining, lightning can’t strike. In fact, lightning has been known to strike up to 10 miles or more away from the main thunderstorm core, almost appearing from “clear blue sky,” and frequently occurs more than three miles from the center of the thunderstorm.

Myth: Rubber tires on a car protect you from lightning by insulating you from the ground.

Fact: Most cars are safe from lightning, but it is the metal roof and metal sides that protect you, NOT the rubber tires. Convertibles, motorcycles, bicycles, open-shelled outdoor recreational vehicles and cars with fiberglass shells offer no protection from lightning. When lightning strikes a vehicle, it goes through the metal frame into the ground.

Fact: Height, pointy shape, and isolation are the dominant factors controlling where a lightning bolt will strike. The presence of metal makes absolutely no difference on where lightning strikes. Mountains are made of stone but get struck by lightning many times a year.

Myth: If trapped outside and lightning is about to strike, you should lie flat on the ground.

Fact:  Lightning can spread out some 60 feet after striking Earth. Lying flat increases your chance of being affected by potentially deadly ground current. If you are caught outside in a thunderstorm, you keep moving toward a safe shelter.

Lightning: What You Need to Know

·    No place outside is safe when thunderstorms are in the area.

·    If you hear thunder, lightning is close enough to strike you.

·    When you hear thunder, immediately move to safe shelter: a substantial building with electricity or plumbing or an enclosed, metal-topped vehicle with windows up.

·    Stay in safe shelter at least 30 minutes after you hear the last sound of thunder.

Protect Yourself and Your Loved Ones

If you are caught outside with no safe shelter anywhere nearby the following actions may reduce your risk:

·    Immediately get out and away from pools, ponds, lakes and other bodies of water. If at the beach, head to shelter immediately. If no immediate shelter is available, head to your car.

·    Many Broward County Parks have Lightning Prediction Systems in place. In the event of a warning being sounded (one long 15-second blast), you have between eight to 15 minutes to take shelter, depending on the speed of the storm.

·    Stay away from objects that conduct electricity such as chain link or metal fences and power lines.

·    Stay off corded phones, computers and other electrical equipment that put you in direct contact with electricity.

·    Stay away from windows and doors, and stay off porches.

·    Do not lie on concrete floors, and do not lean against concrete walls.