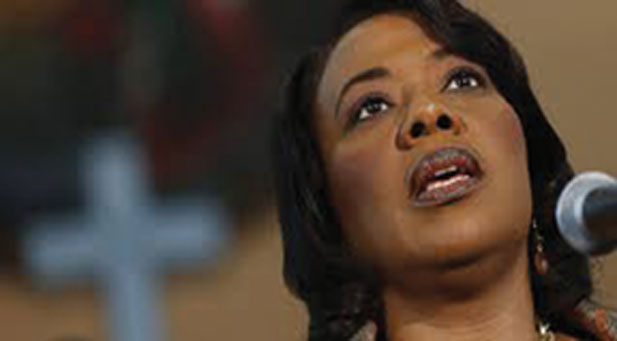 LAUDERHILL, FL— On Feb. 7, 2015, celebrating the legacy of the honorable Dr. Martin Luther King, Jr., his daughter Bernice A. King stepped on stage at the Screen Post Ballroom to remind all of those who attended that the dream hasn’t been met.

We were able to hear from the offspring of an American icon and it was also possible to raise some funds that will go towards scholarships for high school students.

Commissioner Margaret Bates described this speech as “inspiring, challenging” and agreed with Dr. Bernice King that “knowing the dream hasn’t been met, it is still there” we have to work all together to see a change.

During the speech, Dr. King addressed two main points in what she assured is the issue that our society has not been able to fix. “It was not merely a racial issue, but also an economic issue” referring to Ferguson’s events.

Beyond the discrimination we still see in our society, Dr. King believes there is an “economic injustice”. “Inequality is affecting people to be able to mobilize. Along with this, Dr. King emphasized that idea that “there is still an ongoing freedom struggle.”

With an immense force in her voice, she reminded the audience that this and future generations cannot take steps backwards on what her father and other leaders have been trying to accomplish for an “advancement of our society.”

After Dr. King finished her session of autographing her new book, Hard Questions, Heart Answers, Dr. King spoke about how the Millennials and future generations should act in order to witness and be part of the change we are looking for in our society.

Having a strategy and prioritizing one by one the issues we really need to work on is what Dr. King proposes. Thus, she encourages and believes that “every generation has to understand its responsibilities to make some sacrifices, to bring about change”.

As the founder of ‘Be a King’, Dr. King has been working to find leaders in order to have what she calls a society with “KINGdom mindset and a beloved community.”

In the interview, she described this ideal society as: “It is a society where there is a rule of engagement. It is learning how to communicate, how to dialogue, how to exchange those differences… I’m not spending time trying to change you as much as I spend time trying to understand you.”

Finally, asking her about her future plans, the daughter of the Rev. Dr. Martin Luther King, Jr. wants to continue working with the King Center not only raising funds for scholarships, but also creating a scholar intern program where college students can prepare themselves as leaders by “learning and studying the leadership of my father” as Dr. King said.

Aaliyah McCrary was one of the students who earned the scholarship that this event offered to students from Piper High School and Lauderhill 6-12 STEM-MED Magnet school. This young student wants to major in Business and minor in Fashion Merchandise. Asking her about Dr. King’s speech, McCrary mentioned, “I wants to follow the steps of Dr. King of being a leader to help the community. I want to be a voice not for myself, but a voice for everyone as a whole.”

After almost 60 years, the name of Dr. Martin Luther King, Jr., still prevails in the heart of Americans and those who have been touched by his words. Dr. Bernice King, not only a representation of her Legionary father, who was a soldier in the war against injustices, she is also a strong voice for civil and human rights.

She gave us, the people, the opportunity to listen one more time to the importance for each generation to communicate and to really understand that her father’s dream is not near us.

“We, the people, got to wake up the people.” (Bernice King)

A Dream Deferred is the Every Student Succeeds Act (ESSA) just another Elusive Dream?

Parents must get engaged to hold legislators and educators accountable for their ESSA State Plans. Parents must also hold themselves accountable in prioritizing the education of our children. Research shows that just one year with a bad teacher can put a child three years behind. Now, think about what happens after years of neglect and lack of advocacy. […]

Sharpton eulogizes George Curry: ’I have fought a good fight, I have finished my course, I have kept the faith!’

“Our community partners beat back a voter suppression scheme that was being undertaken by officials in Randolph County. Remarkably, officials were trying to shutter 7 of 9 polling sites in this poor, majority Black community […]