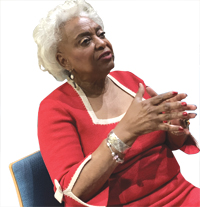 We want to first thank you Dr. Snipes for allowing us to come together and tell your story. We do know that you have been under some malicious scrutiny, vicious personnel attacks and some slanderous accusations. Through it all we wanna know who sister Brenda Calhoun Snipes is and how is she weathering this storm.

“You know I think I’m really surprised of myself about how I am weathering the storm. I think when you have a conscience that reminds you of who you are, where you are, and what you have done and what you did and that conscious is speaking to you honestly, I think you can be OK and that’s where I find myself. I am not sick, I don’t feel distressed, I don’t have headaches; I never did. I don’t have any now and I don’t have any illnesses that I know about. I’m still going about my daily routine.”

Dr. Brenda Calhoun Snipes has been a number of things in her well-lived and productive life.  She is a loving wife and doting mother.  She has been a committed educator and a deeply passionate mentor of teachers.  Dr. Snipes is a highly skilled trainer and coach to teachers and students.   She has been and remains a passionate leader of her people; she is an award-winning administrator and a reluctant but capable politician. In everything she has done, wherever she has been called, Dr. Snipes has left a legacy of meritorious distinction.  Our community has been the greatest beneficiary of her dedication.

Not one to brag or boast, Dr. Snipes has had jobs to come to her without having gone out of the way to get them.

“Just about every job that I have had, someone tapped me on the shoulders and said that I want you to apply for this job. And if I applied for it I got it; that’s how I got to Broward County.”

Even with that being the case, did you ever know or felt that your work was being sabotage? “If that were the case I had no idea that it was happening even before we got to this point. Like I said, when I got home, and I was able to think a little more clearly, I wondered why some things happened when the actions that we were preforming were not new to us. Since it has happened several people have come to me and asked. I think about little incidents here and there and it could have been somebody that wasn’t functioning at 100% as a member of the team, but I had not looked into it and there were things happening that were not common for us as an organization.”

Dr. Snipes represents that generation of Black people, in particular Black women, who were determined to be the very best of whatever they involved themselves in.  Their goal was not to attempt anything but to conquer everything.  Theirs is the generation that knocked down the walls of exclusion by demonstrating their undeniable capabilities.  They did not complain about the way things were- they pushed boundaries by their relentless achievement.  Theirs was a pursuit of a quiet recognition.  One that not even their enemies recognized.  They were hidden figures and leaders in every way.

“Of course, my staff was there, and I believe they were well-trained.”

We didn’t see the kind of support that we saw out front for other elected and appointed officials and it bothered us. When we would engage ourselves with the protesters outside of your office, we only saw three. Did this bother you that there were only three Black elected official who came out and showed support for you?

“You know, in a typical election, nobody would have been there anyway, but when all of the ruckus started from the mob- I don’t want to call them a mob- but they had a mob mentality. They were driven to that point, and they came from everywhere else. They were like a traveling band they would come, create stuff, then leave. They came from other parts of the country. I never thought about who was there. I can’t say I heard from anybody during the time that that was going on, but that was something I didn’t concentrate on.”

Dr. Brenda Snipes is indeed a leader.  I read that leaders are those whose actions inspire others to dream more, learn more, do more and become more.  Indeed.  Dr. Snipes has all of these character attributes.  She demonstrates them daily.

We know that she is task- oriented and her work says so, but we wanted to see others come out and stand with her to claim her competency and her integrity and give her the same respect, earned after over 30 years of service to our communities just as they did for others. She earned that!

We are both impressed and encouraged by her. After sitting down with her in a protracted conversation, it became clear  to us that being Supervisor of Elections is so much more complex and so much more demanding than most of us even dream.  It is a job that is demanding, time sensitive and thankless. It requires a skill set most of us will never have.  All the while under continuous and often unfair scrutiny.  Even so, Dr. Snipes has made the Broward County Supervisor of Elections an award-winning organization. And she did it with no recognition by most of us and certainly no laurels from the immediate past and the now sitting Governor of Florida.

In what appears to be an attack on our Black leaders and those who oppose a certain ideology, what are your sentiments on that?

“I think that there is something moving. You can’t see it and is moving in a way like it used to move a long time ago when Blacks didn’t even have an opportunity to get out there. Why is it so much wrong with our Black leaders to the point where they have to be taken out? Get them out, throw them away. So, I do think that I see some unnecessary attacks on some Black people. Take my situation for example. There are 67 supervisors of election, all except one are elected, and by 2020 all of them will have to be elected. We break ourselves up into groups by the size of your constituencies. During this past election, it was the top six that had issues getting all the votes counted, getting them reconciled. I remember on the first day I think that we got all our votes counted; Miami-Dade didn’t! Then on the second day Miami-Dade did and I’m not sure how. What we experienced was what five or six others had to mitigate- size and pressure. But, Broward was the only County that had issues and was really thrown to the wolves like I was. Susan in Palm Beach had problems with her counting, and she told them that   once she finished counting, she would get them the results. Well, we didn’t say that. So, you see there are times when Black people are handled differently; you may see all these things but when it comes to picking one out, then it’s a Black person whose singled out.”

This is Black History Month.  It is supposed to be a month of acknowledgment of our history’s greatest achievers. I believe we need to recognize and appreciate those among us who deserve and have earned such distinction.  Not only because of what they have done, but because of how well they have done it.  We should do so why they are still alive.

Our community owes Dr. Brenda Snipes so much more that we can ever repay her.  But acknowledging her greatness is a beginning.

If Brenda Calhoun Snipes could stand before an audience and tell us about this horribly unfair situation, what would you say to us?

“We have experienced an injustice, one that I think the Broward County Supervisor of Elections has been in her capacity as SEO treated differently than other supervisors who serve in this capacity. When we get together as a group, you hear all kinds of things that never made the newspapers. See we have a real hard press in Broward who looks for things that the Broward County SEO didn’t do correctly. They can see the same thing that may have happened in Miami-Dade, Palm Beach or Orange County or wherever, but it just doesn’t come to be front-page news. So, I think that we have to learn to challenge the people who are looking under the rug, just looking under the rug, and who like to use words that cut and slash? I’ve always had an open door, and that is what I would say to people. You don’t have to have an appointment to see me. I might have been deep into something but as soon as I can get out of it, I’m going to come and see what you need. I never played that high and mighty Queen, you know. I got a lot of attributes that are different from many of the people that I coalesced with. I never sat down and told anybody- well I got a doctorate and I only got 10 minutes- come on! You get elected, you take an oath to serve people. Come on; just do it. That’s what I did.”

Do you want to go back to work?

“You know I don’t have to go back to work, and I don’t know if I can say I want to go back. As I go about my daily routine people all over Broward County stop me just to say hang in there and we’re praying for you.”

A History of Excellence […]

Leaders are shaped by several things, most especially the people around them as they move from childhood to adulthood.  The values we are given, the character we see modeled and the principles we are told to live by.   These things become anchors of our lives. […]