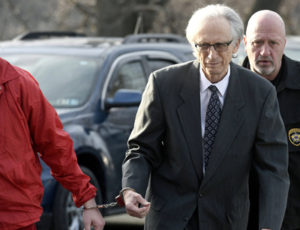 “He held himself out as a pillar in his community — a family pediatrician, an elected member of the school board, a regular attendee at church,” the state attorney general said.

Dr. Johnnie Barto heads into Cambria County Courthouse in Ebensburg, Pennsylvania, on March 18, 2019, for his sentencing in the sexual assault of more than two dozen children. (Todd Berkey / The Tribune-Democrat via AP)

Pennsylvania pediatrician who admitted to molesting several generations of children was sentenced Monday to spend the rest of his life in prison after 18 now-grown women took turns pleading with the court to throw the book at him, with many calling him a “monster.”

Dr. Johnnie “Jack” Barto, 71, was hit with a sentence of 79 to 158 years in prison, virtually guaranteeing that he will die behind bars, Attorney General Josh Shapiro said.

Shapiro called the disgraced doctor a “serial predator,” saying Barto preyed on children “to feed his own sick desires.”

“He held himself out as a pillar in his community — a family pediatrician, an elected member of the school board, a regular attendee at church,” Shapiro said. “My office unraveled Barto’s web of lies, deceit and assault of children, and today he’s been held accountable for his crimes.”

“People trusted him,” he added. And Barto did not abuse only the children he saw at his practice — Laurel Pediatric Associates, located in the Johnstown suburb of Richland Township. He also preyed on family members, including a 7-year-old and a 14-year-old.

Barto’s sentencing came a day after several women — who said the doctor molested them when they were children — described in a lengthy interview with NBC News how the Johnstown com-munity rallied behind him in 2000, the first time he was accused of abusing children.

“Twenty years ago, this predator could have been stopped,” Jennifer Goetz, 42, said on the steps of the Cambria County Courthouse.

Goetz, who said she was about 8 when Barto violated her in 1984, said, “Today is a bittersweet day for me.”

Erika Brosig, who said she was 12 when Barto molested her in 1994, said the doctor had enablers who also need to be called to account.

“Parents were making complaints frequently about Dr. Barto,” she said. “We want to find out who did know and what was the level of their responsibility.”

Brosig was among the women who gave victim impact statements during the sentencing in Ebensburg, Pennsylvania, before Cambria County Common Pleas Judge Patrick Kiniry.

“By luck of the draw of physicians in his office, I was a patient of the defendant one time when I was 5 years old,” Shapiro read. “One time too many. During my visit, he violated me not once, but twice, while other unsuspecting individuals were in the room. While his actions were brief, they were damaging. They impacted my life in how I view myself, including my self-worth and self-esteem.”

“To the defendant: You don’t know anything about me,” Shapiro continued reading. “To you, I am a number in your list of abused children. But I remember you. I remember your white-collared, long-sleeve shirt with light purple vertical stripes. I remember the way I laid and sat when you became a monster.”

Barto’s wife of nearly 48 years, Linda, sat with the victims when the court proceedings got underway. She also submitted a victim impact statement and asked the court for justice for the people hurt by her husband.

“There is not a day when I don’t feel heaviness in my heart for his victims,” Linda Barto said.

As his wife and the other women addressed the court, Barto sat sphinxlike in a gray suit beside his lawyer, David Weaver.

Barto was hit with the staggering sentence two months after he first pleaded guilty to molesting the two relatives, and no-contest to three other allegations brought by children he was accused of sexually abusing at his practice.

Under questioning, Barto also admitted to sexually assaulting dozens more children during the four decades he practiced medicine in and around Johnstown, Shapiro said.

Barto targeted girls and boys, most between the ages of 8 and 12, the chief prosecutor said. The youngest victims were a toddler and a 2-week-old.

Most of the assaults happened after Barto got his medical license back in 2000. It had been suspended after he was accused the first time of sexually abusing three children in 1998. His license was restored in 2000 by the Pennsylvania Board of Medicine.

“When he was first accused in 1998, Barto thought he was immune from prosecution and played a long game to make sure the families thought well of him and allowed their children near him,” Shapiro said.

Despite the rumors that Barto was still molesting children, he managed to elude law enforcement until Dec. 21, 2017, when a 12-year-old girl told her mother that at the end of an examination, the doctor had her sit on his lap while he molested her, according to a probable-cause affidavit.

Barto was arrested by the Richland Township police Jan. 18, 2018. That same day, The Tribune–Democrat newspaper reported, a “Support for Johnnie ‘Jack’ Barto” page went up on Facebook, complete with testimonials from local parents whose children were his patients.

The page quickly came down after Barto finally admitted his guilt.

Shapiro noted that in addition to the 31 incidents of assault charged, at least a half-dozen other cases could not be charged because of the criminal statute of limitations laws in Pennsylvania.

“I will continue to work my tail off to change the laws in this commonwealth so every victim has a chance to hold their abuser accountable,” he said.