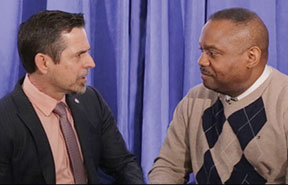 New analysis by researchers at the Centers for Disease Control and Prevention (CDC) indicating that, if current HIV diagnoses rates persist, about one in two Black men who have sex with men (MSM) and one in four Latino MSM in the U.S. will be diagnosed with HIV during their lifetime made headlines after it was presented at the 2016 Conference on Retroviruses and Opportunistic Infections (CROI) in Boston.

But these estimates don’t have to become reality. To learn more about the data and actions being taken to address unacceptable HIV rates, Dr. Richard Wolitski, acting director of the HHS Office of HIV/AIDS and Infectious Disease Policy, talked with Dr. Eugene McCray, director of CDC’s Division of HIV/AIDS Prevention. Dr. McCray’s team developed the estimates.

They discussed key disparities highlighted by these first-ever comprehensive national estimates of the lifetime risk of an HIV diagnosis for several key populations at risk—including MSM and African American women—as well as by state.

In addition, Drs. Wolitski and McCray discussed some of the efforts underway by CDC to prevent these outcomes. These include a CDC-led demonstration project financed by a $16.5 million investment from the Secretary’s Minority AIDS Initiative Fund. The project supports health department collaborations with community-based organizations in seven jurisdictions. The goal is to strengthen HIV prevention and care services for MSM of color. Among the prioritized strategies in this demonstration project is scaling up of access to pre-exposure prophylaxis (PrEP).

Drs. Wolitski and McCray underscored that the data are estimates based on recent diagnosis rates remaining constant. As such, there are steps that can be taken to prevent this outcome. The data is a call to action for everyone to take steps to ensure that individuals, especially those at highest risk of acquiring HIV infection, receive effective HIV prevention services and that those diagnosed with HIV are linked to and retained in care so that they can receive treatment to preserve their health and reduce the likelihood of transmitting the virus to others.

Read more about the new analyses in this CDC press release and associated resources.