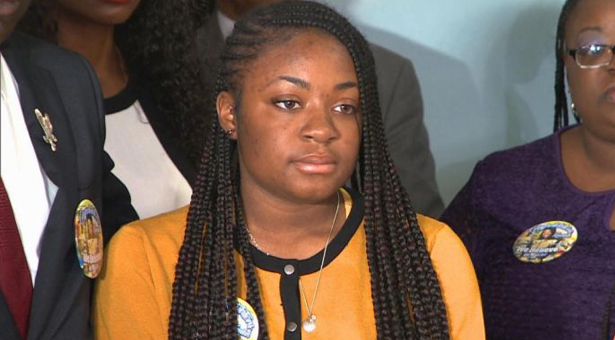 When Florida high school senior Kamilah Campbell’s SAT scores didn’t stack up the way she wanted, she worked hard to do better—but that might not matter now.

Buy Alprazolam Powder “Kamilah explained that she took the SAT for the first time on March 10 with no preparation. Between then and October she practiced diligently, working with her teachers, receiving tutoring, and regularly accessing the preparatory resources of Khan Academy,” according to a statement from attorney Ben Crump.

Online Doctor Consultation Prescription Xanax ce is being called into question now that the scores from Campbell’s retake have been declared “invalid” by the Educational Testing Service and the College Board. Campbell hoped to study dance with a business minor at Florida State University, but she may miss the deadline now—she and attorney Ben Crump are pushing for a review before the application cutoff in a couple weeks, but the College Board usually takes four to six weeks to review score disputes.

“It is not for ETS, a private corporation, to define the limits of human achievement and betterment,” Crump said. “In concluding that the only way Kamilah could have improved her score so substantially was by cheating, ETS defamed Kamilah’s character and replaced what should have been appropriate and motivating personal pride with shame and confusion.”

Best Online Xanax Reviews Although Kamilah provided a sound explanation and evidence for her improvement, ETS has refused to relent, denying this promising and dedicated student access to a college education, the funds to pay for it, and fulfillment of her dreams.

Xanax Online Nz While the College Board maintains that “a score is never flagged for review solely on score gains,” per CNN—they seem to be pointing toward something like similar test answers being the cause of the invalidation—Campbell and Crump adamantly believe that the increase in her score was the “problem” that was found. Based on conversations Campbell had with representatives from the company, she believes her overall score increased by about 300 points.

http://cnt-aranjuez.org/?s=〖인천출장맛사지〗↮예약↤대구 콜⇠{카톡mxm33}♬『qьx488.сом』[][]인천RFM인천천안 출장 대행2019-03-01-17-33[]a☀su목포 모텔 추천[]☢§인천☺♪╣부산 모텔 추천 Campbell refuses to allow her work to be tainted by what seems like an accusation of cheating—and a chorus of friends, family, and professors have spoken out in her defense. From the Miami Times:

Professor Julio Estrada taught Campbell during the 2017-18 school year. He noted Campbell’s desire to improve while in his class.

How Do I Get Prescribed Xanax Online “[Campbell] struck me as an individual who worked hard to improve her grade in my class,” he said. “During her time in my class, I never witnessed any dishonesty or other issues with integrity coming from her.”

Alprazolam 2Mg Online Honor student Temprest Toombs helped Campbell as part of her independent study for the math portion of the test. The two met once a week for close to two months prior to the October test.

“I offered [Campbell] help on the math section with the use of the Princeton SAT book,” Toombs said. The book is the same one Campbell used with her tutor. “Most of the [study] sessions were supervised by my mom,” Toombs said.

http://boldmarketing.com/wp-cron.php?doing_wp_cron=1580935103.8866000175476074218750 It should never go unnoted that the SAT, in the first place, has been notorious for race and income inequality for test takers—the fact that there’s an entire lucrative industry around taking the test, heavily promoted by the College Board itself, makes that particularly damning and honestly makes the whole thing look like a glorified racketeering ring.

Order Alprazolam So to see a black student push beyond the utter bullshit of the SAT and ostensibly do everything right only to be told her scores are invalid is utterly frustrating and reeks of hypocrisy.

http://audiodescription.co.uk/directory/describers/filter/ The College Board, however, seem confident that their review process is sound, per CNN:

Buy Xanax From Usa “At the end of the score validity process, we will only cancel scores if we are confident that there is substantial evidence to do so,” Goldberg continued, without offering a time frame. “We never cancel scores on score gains alone.”

http://tamaralounge.com/wp-json/wp/v2/pages/4733?_locale=user We certainly hope they aren’t just standing in the way of a black girl’s dreams to defend the integrity of their little test, but time will tell—hopefully sooner than later, though.

Ordering Alprazolam      “As a mother and a former educator, I was extremely disappointed to learn that Kamilah Campbell’s SAT score is being challenged after she showed marked improvement in the second exam. It is my understanding that the first test that she took was a practice round for which she had not prepared. Before taking the second test, however, she spent a significant amount of time studying and took an SAT prep course. Her hard work and diligence paid off and she increased her score by about 300 points. […]