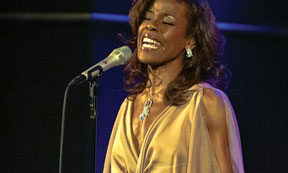 With the kinda of voice and a personality to match that could easily make you fall in love with her, songstress Nicole Henry will be wooing audiences as she performs here in South Florida at the Arts Garage in Delray Beach on Aug. 14, 2015.

As I spoke with Henry for a brief telephone interview, I could almost touch her passion for what she does.

“I always want people to understand and feel the emotions and believe me! You believe Aretha Franklin and I always want to get the sound that reaches people; real passions not just street music.”

One writer wrote of Henry, “The evening’s high point came when Henry sang Bob Marley’s Waiting In Vain, placing even the wait staff in a trance. As if the reggae legend’s lyrical plea to his love could be any more romantic, Henry’s voice, accompanied by the gentle rifts of an electric guitar, added a layer of satin to the song, making it not only romantic, but sensual.”

Since her introduction in 2004, Henry is recognized in the jazz world as a much-admired vocalist. She was named Best New Jazz Artist during that year in Japan and she has maintained her accomplishments and acclaims ever since.

Nicole has expanded and shared her talents through the musical umbilical cords across the genera of soul, gospel, blues and jazz. She has performed with greats like jazz artists Kirk Whalum, Gerald Clayton, John Stoddart, Julian Lage, Gil Gold-stein, Larry Grenadier, and Eric Harland.

“I want to push the envelope and do some contemporary Soul live and original music. We all change; I wanna do some of the 70’s Soul’s music roots. Rhythm and Blues change with the time and Soul is what it is; deep real!”

Henry has proved and shown her soulful, inspired interpretations of some of her favorite classic hits of the ‘70s from legendary musicians including Bill Withers, Aretha Franklin, Joni Mitchell, James Taylor, The Commodores and Gladys Knight.

Growing up in a musical family in Bucks County, Penn., Henry wrapped herself in the arts early on, singing in school and church, and studying cello and ballet. After graduating from the University of Miami with a degree in Communications and Theatre, she launched a successful acting career, appearing in commercial roles as well as a series of voiceover assignments. However, she directed her strongest passion toward the development of her full-time singing, career which was quickly rewarded in her present hometown.

From someone who, “loves to look at people in love,” and enjoy their happiness, I can’t wait to hear and see Henry as she al-lows us to take a soulful journey with her in a musical therapeutic evening.