What one does for his fellow man often leaves an unmistakable, indelible imprint on community, society and the world. So it is with Coach Johnny Alexander, who was honored Friday,  September 27, 2019 at the Westin Hotel in Fort Lauderdale by the Eta Nu Chapter of Omega Psi Phi Fraternity, Pompano Beach, Florida as its third Lifetime Achievement Award recipient following in the footsteps of previous honorees – former Blanche Ely principal James L. Jones and legendary St. Thomas Aquinas football coach/athletic director George Smith.

Born on March 8, 1941 in Sandersville, Ga., in 1948 Coach Alexander‘s family visited and eventually settled in Fort Lauderdale. He attended the “Colored School “on Fourth Street, now Walker Elementary, grades first-sixth, before matriculating to Dillard Comprehensive High School, now known as Dillard High School, graduating with honors, C O ‘61. At Dillard he participated in several activities including basketball, football, baseball and track & field. Coach Alexander nostalgically and proudly recalls teams that he was a part of competing successfully on the state level in all four sports. Tragically, his mother passed while he was in high school, forcing him to become the head of the household, responsible for ensuring that his younger siblings were provided for and with the help of Dillard principal, Mr. S. Meredith Moseley et al, he succeeded. And though those obligations kept him from attaining a college education, his dedication to the youth of Broward, particularly the Dillard community and Western Tigers Youth Program, has earned him an honorary doctorate of humanities degree, conferred upon him by the myriad youths whose lives were positively impacted, altered or influenced by visionary leadership and dedication. Two of his mentors, legends in their own right, were in attendance: Coaches Robert Green and Herman Pittman. Testimonials were also given via phone by former Dolphin great Nat Moore and former Dillard football coach Art Kennedy who for many years Congressman Alcee Hastings’ assistant.

Master of Ceremony Brother Terry “Bruce” Brown spoke reverently about Coach Alexander’s impact on his life as a lad. Not only was Johnny his first coach, but he was also a father figure away from home who could wield a firm disciplinary hand when needed. But Bruce also remembered his first sports related banquet in a lavish establishment and the often maligned but utilitarian bus AKA “Shot Gun” that transported Coach’s kids everywhere. 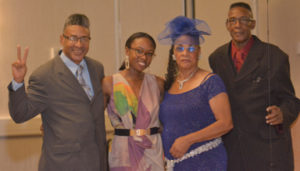 UPS executive Bruce McGraw, a Dillard High and Alabama A&M graduate, captured Coach Alexander’s very essence as a mentor, coach and child advocate. While tossing a football one day in the park, Coach Johnny saw this skinny kid’s fluid throwing motion, wondering if he played quarterback for Dillard. Bruce answered no but the mere inquiry gave him the confidence to make him believe that he was capable. And the rest is history. That was the impact that Coach had on so many.

Sitting at my table almost in isolation was a striking young lady of distinction whom my wife recognized as a past acquaintance. When asked what brought her here,  she spoke of the impact that Coach had on her as youth, stating that she was a shy little girl with untapped athletic potential that only evolved at the behest, encouragement and nurturing of Coach Alexander, and she simply wanted to show her appreciation, respect and love for him. Levern Palmer became an outstanding track star at Dillard in the late 70s and now teaches in the ESE Department at her alma mater. The aforementioned stories don’t even scratch the surface regarding Coach Johnny’s contributions to our children.

When given the mike, Coach Alexander thanked all who were influential in his life such as former Dillard football coach Ted Primus, track & field coach Robert Thompson, baseball coaches David Deal and Samuel Sneed and basketball coaches “Big Man” Herman Pittman and Sam Hearns.  Most importantly, he thanked his wife of 57 years and his loving family whose support was invaluable along with the community at large. The  brothers of Eta Nu under the dynamic leadership of Basileus James St. Louis and the Eta Nu Education Foundation and Chairman Harry Harrell would like thank our sponsors for assisting in the execution of the third annual Eta Nu Benefit Fundraiser: Bank of America, Remy Cointreau, Tom Jenkins, Legal Shield, UPS and Phil Smith Automotive Group. Congratulations Coach Johnny, thank you and Godspeed.