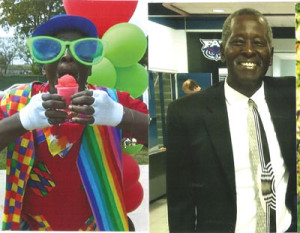 Charles Jackson, Jr. had been an educator in Broward County Public Schools for 29 years.

Whether Charles Jackson, Jr., is fulfilling his role as husband to his wife Belinda of 28 years or providing helpful advice to one of his three sons and three daughters, Jackson has donned many hats over the years. In addition to his family responsibilities Jackson has impacted on countless numbers of students during his career, as a teacher’s assistant, in the Broward County Public Schools System. Jackson is just one year shy of his thirtieth year, the majority of which he spent at William Dandy Middle School, in Fort Lauderdale. To say Jackson likes working with kids would be an understatement.

By any standard Jackson has led an exemplary life while serving as an amazing a role model, in his community. However, these aforementioned things to know about Jackson, only tell a part of his story. After closer examination, a revealing story unfolds. You see this the 61 year-old educator has had more than a few tricks up his sleeve over the past three decades.

In 1987 Jackson decided to take his show on the road. He took his classroom experience with kids to another level to pursue another passion, one which involved entertaining the young and young at heart. That’s when Jackson began his transformation into his persona, as CJ the Clown. Just mention the word clown brings a twinkle in his eyes.

His passion for “clowning” stems back to his earlier days in school where it often wasn’t as well received by his former teachers, as it is today. Now his performances are welcomed in schools and other venues that cater to children throughout South Florida.

Fast forward to today and you will find Jackson putting those “class clown” skills to good use. In addition Jackson has found time to author eight books on, of course the finer points on being a clown.

In an effort to give back to the community which has supported him over the years Jackson aka CJ the Clown, plans to take his act to the Broward County Main Library in downtown Fort Lauderdale with a performance that is absolutely free. CJ the Clown will be performing his act which includes elements of Science, Technology, Engineering, Art, and Mathematics (S.T.E.A.M). Not to mention traditional clown theatrics such as magic, face painting, juggling and everything else one would expect from a real live clown. The show is schedule on Saturday February 3, 2018. To find out more about his upcoming event or reach Jackson, he can be contacted by email at-cejjr60@gmail.com.

Jackson aka CJ the Clown, recently sat down with the Westside Gazette Newspaper for an interview, to share some insight on his experiences over the years.

(Westside Gazette)-What made you want to be a clown?

Jackson-“Despite only having a sixth grade education my dad Charles Jackson, Sr., owned a chattahoochee and concrete business. It was great working with him and my brothers so; I got the business sense from him. But, I just didn’t want to do this when I got this age. It was hard physical work and I used to read a lot of comic books. My brother used to buy comic books and I used to read them. So, I had a vivid imagination. I was looking for a profession that I could do myself. I decided to go to the Comedy Strip on Open Mic Night. I did well during my three minute routine, the manager wanted more. However they talked about God so bad that I decided I wanted something more family oriented. I ran across a book written by three Christians on clowning. So from the book I learned make-up, juggling and all the clown routine. This journey began when I was in my early thirties.”

(W.G.)-Do you remember your first performance?

Jackson-“The one I have documented was in 1987 was at a local Boys & Girls Club in Fort Lauderdale. They invited me to their program which had over 400 kids that night. I loved it because it brought laughter and smiles on their faces. The inner spirit within me said this is what you should do. I just felt good about it. I wanted to do it. I decided to get more experience so that eventually I could do it full-time. Now that opportunity is occurring. I have my state license and joined the World Clown Association. I’ve written some books and gotten my first copyright from the Library of Congress. I feel like the Lord has allowed me to get to this point because I didn’t want to go before my time.”

(W.G.)-Can you recall seeing or witnessing a Black clown perform before you decided to try it?

Jackson-“I saw a Black clown at the Swap Shop. He was just sitting down blowing up balloons. But before that, I saw some old footage from the Vaudeville days; performers like Sammy Davis Jr., Bill “Bojangles” Robinson, guys during that era even Satchel Paige from the Negro Baseball League impressed me with their performances.”

(W.G.)-What does it take to become a great clown?

Jackson-“I think first of all you should love it. And you have to work on your skills. I remember a kid asking me, “Are you a real clown?” I thought that was an interesting question. My response to that particular kid was, “well these are the skills that a clown has. Do I juggle? Yes. Do I paint faces? Yes. Do I blow up balloons? Yes. Am I a clown? Yes I’ve got the basic skills that a clown has.”

(W.G.)-What are your plans for the future?

Jackson-“My plans for the future are to perform live shows before theater audiences. I love live shows. I’ve done a lot of birthday parties. I want to do theaters. I’ve made a DVD showing kids how to count from zero to 100. I’ve written about 14 books, four of which I wrote just to encourage somebody. The others I plan to get published. I had one published and it’s called, “CJ the Clown Goes to School.” It’s a story about a circus clown that I’m really proud of because it’s the first one and it’s going to promote my upcoming show.”

Well, how can we feel more professional and less like factory workers producing widgets? First, we must clarify our mission. Students are not widgets. There can be no reject bins for human beings with different needs and varied learning intelligence! […]