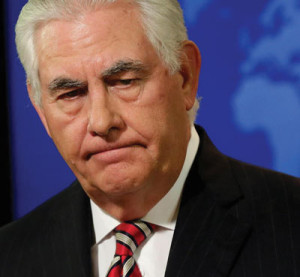 The secretary of state acknowledged Moscow’s 2016 interference. Then he continued to talk about cutting back on U.S. diplomacy.

Beleaguered Secretary of State Rex Tillerson acknowledged in a closed-door meeting with U.S. diplomats on Tuesday that Russia “interfered in democratic processes here,” something President Trump still describes as “fake news” intended to delegitimize his presidency.

It’s a precarious position for Tillerson to take, even privately. Tillerson’s job is on thin ice, as rumors swirl that he will be swapped out for CIA director Mike Pompeo. Within the department, Tillerson’s support is wafer-thin, as diplomats have come to see his purpose as hollowing out U.S. diplomacy.

Publicly, Tillerson has been a bit more circumspect about the Kremlin question. In April, Tillerson called the “question of Russian interference” in the election something that was “fairly well-established.” In August, Tillerson told his Russian counterpart, Sergey Lavrov, that the election meddling engendered “serious mistrust between our two countries.”

Nor was Tillerson’s acknowledgement about Russian interference in the 2016 election the only departure from Trump’s positions.

While Trump has “decertified” the Iran nuclear deal and is looking for the exits—something U.S. allies consider a catastrophic step toward war—Tillerson told his Tuesday morning town hall, “for the time being, we are in the agreement,” according to a State Department official.

But the official referred to Tillerson as “an idiot” for suggesting a retrenchment of diplomatic efforts in Europe at a time when Russia and the far-right forces it sponsors are aggressively competing for influence.

Tillerson said “the footprints in places like Paris and Rome are too large,” the official told The Daily Beast. The official summarized Tillerson’s position as: “they are nice places, but is there really work there for all the employees? He basically says to take people from those places and send them to conflict [zones and] hotspots.”

The purpose of the closed-door town hall was not immediately clear to the official, who read it out to The Daily Beast in real time. Some State Department reporters were able to watch it on closed-circuit TV and tweeted highlights. At times it strayed into the bizarre, with Tillerson praising the culture of the American West, where “your word is your bond.”

Tillerson took career diplomats on a tour of the geopolitical horizon. It took the secretary of state 37 minutes to praise and thank his workforce.

But a major aspect of it was to praise Trump and hail his leadership—what the official told The Daily Beast sounded like “Trump ass-kissing.” Tillerson praised Trump’s decision to keep U.S. troops in Afghanistan as “bold,” despite being a status-quo decision that keeps a 16-year war going without plans for victory. And to get to his praise of Trump, Tillerson rewrote history.

“He referred to ISIS as a caliphate, stating basically that the caliphate was expanding when Trump came in,” the diplomat said. In fact, ISIS was losing territory, and Trump early on accepted the “by, with and through” military strategy he inherited from Barack Obama. Nor did Obama officials tend refer to ISIS as possessing a caliphate, out of concern for inadvertently legitimizing the group. Obama in February 2016 called ISIS “not a caliphate, it’s a crime ring,” in a typical remark.

“He is essentially talking about policy accomplishments and positing that State has been very successful over the last 11 months he has been at State. He seems totally unaware that much of the strategy remained on autopilot when this administration took office,” the official said.

A former ExxonMobil CEO, Tillerson was awarded the order of friendship from the Kremlin, a flashing red light to the diplomatic corps. That showed through in Tillerson’s town hall meeting on Tuesday. He praised Trump for trying to focus on “productive engagement” with Russia, despite explicitly denying Russia’s election interference, which U.S. intelligence assessed as benefiting Trump. And Tillerson suggested that Ukraine is the bone in the throat of an improved relationship, without spelling out on what terms he is prepared to seek for resolution.

“He seemed to position that Ukraine is the major impediment to improved relations,” the State Department official said.

When it came time to take questions from the assembled diplomats, Tillerson was asked if he was satisfied with diplomatic efforts on North Korea, which is now testing intercontinental ballistic missiles intended to reach the mainland U.S. with miniaturized nuclear weapons. Tillerson praised the international diplomatic process.

“He is satisfied that we have been able to move the diplomatic pressure campaign,” the official said.

Not even a year into his tenure, Tillerson has been rejected by the State Department’s antibodies like an incompatible organ transplant. What began as frustration over the slow pace of nominations for senior positions has coalesced into hostility at Tillerson’s vision of a U.S. diplomatic apparatus that simply does less—a retrenchment of American global power at a time when the Trump administration insists it is leading through strength. The secretary has thrown his weight behind an internal reorganization and steep budget cuts to the department.

In September, the American Academy of Diplomacy, a prestigious outpost for retired diplomats, wrote an open letter to Tillerson that referred to “the suspicion and low morale which now affects so many in the Department.” The next month, Tillerson told Bloomberg in reference to low diplomatic morale that “I’m not seeing it, I’m not getting it.”

Inside the hallways of Foggy Bottom, Tillerson is on a death watch. His relationship with the president appears irrevocably shattered after October reports that the secretary referred to Trump as a “fucking moron.” Tillerson’s response was to hold a press conference swearing fealty to Trump, but he conspicuously declined to deny the remark. The relationship has yet to recover: Trump boasted of having a higher IQ than his secretary of state and floats media trial balloons about replacing Tillerson. About the only friend Tillerson has is Senator Bob Corker, the chairman of the foreign relations committee, who openly feuds with Trump and recently announced his retirement.

“He is fucking tone deaf and has zero awareness of how miserable many people are,” the diplomat told The Daily Beast.

“He is so fucking patronizing. He’s talking about making sure everyone can achieve their potential. … he is saying he enjoys the people, getting to know the people, which is a total bag of shit.”