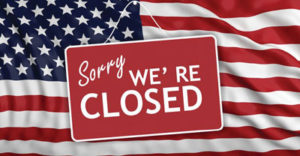 As the government shutdown enters an unprecedented fifth week, some are calling for drastic measures to end the stalemate that has 800,000 government employees either working without pay or altogether furloughed and unable to put food on the table.

In a recent column, Charles Ellison, a political strategist and host of the radio program, “Reality Check” on WURD Radio, said Congressional Republicans could help re-open the government by simply corralling enough votes in both the House and Senate to arrive at the two-thirds majority needed to override any Presidential veto of the federal budget.

But Congressional Republicans – led by Senate Majority Leader Mitch McConnell (R-KY) — refuse to do that. McConnel claims that not only is he awaiting a deal between Congressional Democrats and the White House, but he also needs approval from the president before acting.

“Which brings to mind three questions:

1) Could states do that instead?

2) Why are Members of Congress still getting paid?”

“I don’t know if suing will get us anywhere in any type of manner,” said Delaware County, Pennsylvania Democratic Chair Colleen Guiney.

“I’m not sure if it’s an option but Democrats in Congress have seven bills to reopen the government, but McConnell is refusing to consider any of the bills. The Senate should respect the will of the people,” Guiney said.

U.S. Rep. Mary Gay Scanlon (D-Pennsylvania) said she and other Democrats have worked tirelessly to find and offer solutions to reopen the government as thousands of federal employees have gone without pay and are struggling to pay their bills and feed their families.

“What I fear is this administration and our Republican colleagues in the Senate have forgotten is that this is the people’s house,” Scanlon said. “We have an obligation to work for them. Refusing to uphold that commitment, that promise, is a slap in the face to the American people,” she said.

“It would significantly delay any progress towards an actual resolution,” he said.

Unlike the federal government, a state level government shutdown in Pennsylvania is unlikely because a court decision mandates that state employees must be paid as long as the state is still collecting tax revenue, Charlton added.

“The Republican legislature has been diligent in ensuring that the state’s expenses do not outpace its revenue. Any increase beyond that would require tax increases, which the citizens of Pennsylvania do not want,” he said.

As to why federal lawmakers continue to draw a paycheck despite the shutdown, Charlton said the salaries of U.S. senators and representatives are paid by the treasury and are set by Congress itself.

“It’s a legislative function not a judiciary one,” Madonna said.

“Folks injured by the shutdown might sue but the courts would get involved in the separation of powers doctrine. That’s been in the courts now, but a federal judge refused to rule on the charge,” he said.

More pointedly, Professor Garrett Epps who’s a professor of law at the University of Baltimore, said the Constitution would not allow members of Congress to be sued for any vote or failure to vote in Congress because the  Speech or Debate Clause would cover that

“I also know that this shutdown only affects one-quarter of the federal budget so quite a few employees are still being paid like members of Congress,” Epps said.

Further, it’s Congress’ job and they make the rules so there’s no legal penalty if they don’t reopen the government, said Justin Levitt, a Constitutional law scholar and professor at Loyola Law School.

“The Constitution allows Congress to fund government, and everybody assumes that federal officials would want federal activity.

But it doesn’t require Congress to fund the government,” Levitt said.

“So, there’s nothing to be gained by a lawsuit. It would fail,” he said, noting that there’s currently a federal lawsuit by federal officials who aren’t getting paid, saying that it violates the 13th Amendment to force them to come to work unpaid.

However, “the courts so far have said that because those officials could quit and get

another job, they don’t win either. At least so far,” Levitt said.

Also, another reason member of Congress continues to receive their pay despite the shutdown is that 75 percent of the government had already been funded prior to the shutdown, Levitt said.

Ultimately, the pressure here is going to be political, rather than legal. Enough people get ticked off, and then this shutdown ends,” Levitt said.

Finally, Michael J. Gerhart who’s the Samuel Ashe Distinguished Professor of Constitutional Law at the University of North Carolina School of Law in Chapel Hill, said the shutdown is all governed by politics.

“McConnell has the power under Senate rules to block votes on legislative matters he does not wish to bring to a vote, and there is no legal basis on which Democrats could challenge his decision.”