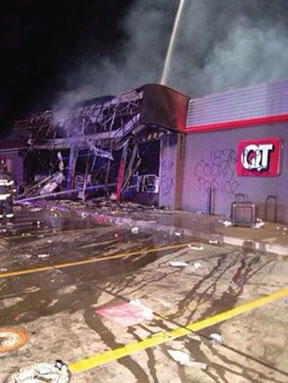 Ferguson, Mo. exploded into in flames.

A mass meeting was held on Saturday at a church in Ferguson to define and chart a course toward these broader goals. But the overall goal is already outlined in an open letter supported by “numerous” unnamed citizens, but bearing the sole signature of DeRay McKesson, one of the more prominent protesters in Ferguson.

The letter reads: “So you will likely ask yourself, now that the announcement has been made, why we will still take to the streets? …Until this system is dismantled, until the status quo that deems us less valuable than others is no longer acceptable or profitable, we will struggle. We will fight. We will protest.”

In August, McKesson helped create a daily Ferguson newsletter, and a website that lists nine demands. The evolving list currently includes “political accountability” for Brown’s death; the creation of an assessment tool to gauge racial bias within police departments; and an end to “provocative police behaviors” that suppress First Amendment rights.

No timeline has been placed on agitating for these demands. There is also little sign that Missouri authorities are interested in considering them.

Faith leaders plan to continue using their unique positions in society to advocate for peaceful solutions. Rev. Cassandra Gould, for example, has been active in Ferguson since August and was in front of the Ferguson Police Department with protesters and Brown’s family when the grand jury decision was announced.

“There was an incredible amount of pain, and also some agitation,” she said. “To see young people screaming out in agony…young people were coming up to us, hugging me – because I was wearing my collar – when they see us [clergy], we are kind of a sign of hope. But that night, I felt more helpless than I’ve ever felt in this role.”

Gould, who serves as pastor of Quinn Chapel A.M.E. Church in Jefferson City, Mo., spent the rest of that night tending to tired and tear-gassed demonstrators at a few church-based sanctuaries around town. Despite a deal between clergy and police to leave the sanctuaries undisturbed, she says, police raided several, confiscating supplies and dispersing those inside.

“I’ve spent my life in St. Louis. I don’t remember much about the Civil Rights Movement…my mom marched to Selma. I thought that was part of a historical narrative, and I never thought I would see anything close to it,” she says.

Gould is also a member of the PICO National Network, a nonpartisan faith-based social justice organizing network working with 1,000 religious congregations across the United States. Its members, and other unaffiliated clergy, have been working behind the scenes in Ferguson to protect protesters’ safety and First Amendment rights. Gould says that moving forward; people of the cloth will continue to support the movement by bearing witness to police response, holding vigils and providing spiritual support, and meeting with authorities to advocate for policy reform and just solutions.

“We as clergy have an opportunity for a particular number of reasons…we have access…our voice is able to be heard where many others are not. There’s no agenda, it’s just about right and wrong. It’s about what is equitable,” she explained. “I’m encouraged by the number of my Caucasian colleagues that show up with us, and care as much as we care. I’ve gotten calls from people around the country…they realize this is an American problem, not just a Ferguson problem.”

Human rights activists are also documenting militarized police responses around the country to build a human rights violation case against the United States. The Ferguson to Geneva delegation, which presented testimony to the United Nations Committee Against Torture in Switzerland last month, has invited United Nations investigators (called Special Rapporteurs) to launch their own investigations into the matter.

“The UN rapporteurs are from the Office of the High Commissioner on Human Rights. They’re independent investigators tasked with looking into human rights issues all across the world. Citizens often request their presence, and the Office has to agree to visit,” says Meena Jagannath, a human rights attorney and member of the Ferguson to Geneva delegation.

The investigators are akin to the Justice Department lawyers who monitored civil rights marches and voter registration in the South in the 1960s. The delegation is funneling their eyewitness accounts to the rapporteurs to encourage United Nations involvement.

“One [rapporteur] wrote us a long letter talking about how he has sympathy for us. Another one, we have a meeting with him in New York in early December,” says Justin Hansford, human rights law professor at Saint Louis University and lead organizer for Ferguson to Geneva. “We have countries around the world speaking out about Ferguson. We tried the local level, the state, and federal government. We have to take this to the court of global opinion now.”

Those who are unwilling or unable to join the protests also have a forum to impact the ongoing movement. Six publications, led by U.K.-based The Guardian, have collaborated to call for solutions from the public via FergusonNext.com. The project has collected thousands of citizen suggestions so far, ranging from police body cameras to better inner-city schools.

While the state of Missouri will not indict Darren Wilson for any crime in connection to the shooting, Gov. Jay Nixon has created an independent 16-member commission to study the “underlying social and economic conditions” fueling the community’s response. The committee is scheduled to release its findings next year.

The U.S. Department of Justice has two investigations underway, one into whether Wilson violated Brown’s civil rights and a second one into the larger practices of the Ferguson Police Department. Brown’s parents are also considering bringing a civil action against Wilson.

“The end game…has to be accountability,” Justin Hansford says. “Michael Brown’s killing was a flashpoint, but the end goal is not just a resolution of this case. We’re trying to make sure future Mike Browns don’t happen again.”

Jean’s Olympic journey; as told to the Westside Gazette reporter

Jean’s Olympic journey; as told to the Westside Gazette reporter

Abrams Blasts Trump, McConnell for ‘Power Grab’ After State of the Union Address

After patiently waiting in the wings as President Donald Trump used 90 minutes to deliver what was supposed to be a 45-minute State of the Union Address, Abrams provided a scathing Democratic rebuttal to the president’s highly-scripted speech to Congress on Tuesday, Feb. 5. […]