“We send our sincere condolences to the Leffall family on the passing of Dr. Leffall,” said FAMU President Larry Robinson, Ph.D. “Over the years, countless Rattlers have been inspired by his pro-fessional accomplishments and unselfish service to others. His name and legend will be enshrined forever in the annals of Florida A&M University.”

He was born May 22, 1930 on the campus of what was then the Florida Agricultural and Mechanical College (FAMC). His father, LaSalle D. Leffall, Sr., taught agriculture at the Tallahassee campus. His mother, Martha Leffall, received her elementary education degree from FAMC in 1946.

He then entered Howard University College of Medicine, from which he graduated at the top of his class in 1952. A decade later, he joined the faculty as an assistant professor. He later became chairman of the surgery department and was named the Charles R. Drew Professor of Surgery in 1992. 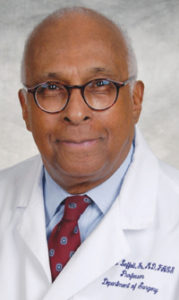 Dr. Leffall was the first African American to serve as national president of the American Cancer Society.

He was also known for his philanthropy. In 1997, he and his wife Ruth and sister, Dolores C. Leffall, donated $350,000 to FAMU to create the Martha J. and LaSalle D. Leffall Sr. Endowed Scholarship in honor of his parents. The need-based scholarship is for Florida residents, preferably from Gadsden County.

At the time, the Leffall’s gift was the largest individual donation to the University, according to FAMU’s former Vice President of University Relations Eddie Jackson.

There is a laboratory named in Leffall’s honor in the Frederick S. Humphries Science Research Center.  “We are grateful to recognize him by leaving a permanent mark of his contribution,” former FAMU President Frederick Humphries, Ph.D.  said in a statement.  “We’ve lost a great supporter of good health and the maker of great medical doctors.”

As the news of Dr. Leffall’s passing spread around the nation, colleagues and fellow alumni reflected on his long list of accomplishments in the field of medicine, education, community service and much more. The FAMU National Alumni Association issued a post on Facebook mourning “the loss of a true legend.”

“His leadership in the medical community was evident by all the great things he accomplished, but his real impact was his love for working with our youth,” FAMU NAA President Col. Gregory L. Clark said in a statement. “He will be truly missed.”

John Blake, Jr., who continued the early tradition of bringing the violin into the jazz arena and making its voice heard with the music of Africa to avant-garde, R&B, blues and spirituals, died Aug. 15 in Philadelphia. […]