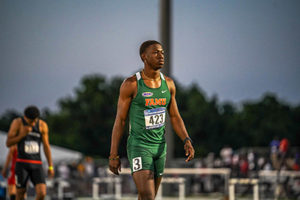 Florida A&M University (FAMU) junior Jaylyn Scott broke his own school record in the 400-meet hurdles on May 28 as he advanced to the NCAA Division I Outdoor Track & Field Championships June 9-12 in Eugene, Oregon.

Scott clocked a personal and school record 50.36 to finish seventh overall and qualify for next week’s NCAA championships.

“I honestly didn’t even know that I broke the school record,” said Scott. “That’s definitely something I’ve always wanted to do since I was a freshman, just leave a legacy with FAMU and be remembered forever.”

Scott’s previous school record in the 400m hurdles was set on May 16 at the Aggie Classic Twilight, breaking Pugh’s mark of 50.97, which was set in April 2015.

“I feel like my performance at the East Preliminary was pretty good,” said Scott. “Anytime I run, I always feel like there is room for improvement, and I’m probably my hardest critic because of that mindset.”

“When he came in as a freshman, I knew this was bound to happen,” said Dawson. “I’m extremely proud of him and the times he’s hitting now are phenomenal. He hasn’t even reached his max potential.”

Scott, who has five 400m hurdles wins in his career, joined an elite group of sprinters over the past eight years who have qualified for the NCAA Division I Men’s and Women’s Outdoor Track and Field Championships. Pugh represented the Rattlers in 2015 in the 400m hurdles, while the women’s 4×100 relay team of Nakia Linson, Jasmine Smith, Ashley Ivey and Dynasty jones participated in the 2013 meet.

The men’s 400m hurdlers semifinals are scheduled for 8 p.m. on Wednesday, June 9 at Hayward Field on the campus of the University of Oregon. Fans will have the opportunity to watch the event on ESPN2 and ESPNU.