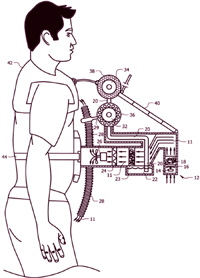 A Florida A&M University (FAMU) professor has developed a cooling vest that could be a lifesaver for football players, fire fighters, soldiers and others who toil in hot, humid weather and also generate millions for the University.

Charles Magee, a professor of biological systems engineering in the College of Agriculture & Food Sciences, has been awarded a U.S. patent for a solar adiabatic cooling apparatus, which he calls a solar evaporative cooling vest – just the thing needed as warmer days approach.

Magee developed the cooling vest to provide personal cooling for individuals in hot and sunny environments. He envisions a variety of users, such as soldiers, football teams, fans at outdoor sporting events, hikers, forest fire fighters, landscape and field workers who would benefit from his apparatus as they struggle to remain cool while they toil in the hot sun. The apparatus operates on the same scientific principle as the large evaporative cooling systems placed on the sidelines of professional and college football games, Magee said.

“There are thousands of high school and college football teams that could use this portable evaporative cooling system to reduce heat exhaustion in the players during practices and games,” said Magee. This could be a lifesaver, he said.

“We all know of cases where football players have collapsed due to heat exhaustion and some have died due to heat strokes,” Magee added. “This is one of the reasons why I did the invention.  Further, I believe the cooling apparatus can do for FAMU, what Gatorade did for the University of Florida.”

The adiabatic cooling apparatus is designed for a person’s upper body to cool the surrounding ambient air 15-20°F, Magee said. The apparatus can function in both a high and low humidity and a high temperature environment. It includes a composite ice condenser that will condense fresh water from ambient air to recharge the water supply source.

Magee say the next step is to get some prototypes made and find a football team willing to test them on their players.  The solar adiabatic cooling apparatus is the first issued patent in the history of FAMU’s Biological Systems Engineering (BSE) program.  However, it is Magee’s seventh patent, with five patents presently pending.

A small start-up company has already expressed an interest in manufacturing and marketing the apparatus, Magee said.