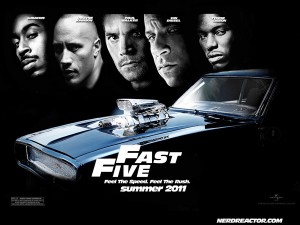 Buy Alprazolam In Uk It’s like jumping into a car, shoving it in gear, stomping on the accelerator and driving recklessly without a seatbelt. From the opening, adrenalin-pumping prison bus escape to a heart-pounding car theft aboard a fast-moving train, Fast Five throws it down from the jump…

Car thief Dom Torreto (Vin Diesel) and his brother in crime, ex-police officer Brian O’Conner (Paul Walker), have hightailed it to Rio de Janeiro, Brazil hunted by international law enforcement who suspect them of theft and murder. The guys plan to rob a local crime lord (Joaquim de Almeida) of $100 million and use the proceeds to get out of the car thievery business. Can they do it? Not without help.

Buy Xanax Ireland Online The script’s storyline (Chris Morgan, Fast & Furious) is usually plausible. Events happen in a logical order and if you question why a plot point is in a scene, there is most often and answer somewhere up the line. There’s a pregnancy, a budding romance and an unpredictable alliance. The plotting adds glue and mortar. The surprises make this an unpredictable movie.

Can You Buy Xanax Over The Counter In Dubai Fans will turn up in droves to watch the rubber hitting the road, the screeching tires and head on collisions. They will leave with a doozey of a hangover. It’s that over-the-top. The mind-blowing races, chases and thrilling escapes are crack/cocaine for adrenaline junkies. Justin Lin’s tight direction focuses on the motion and excitement first, then on the exotic location and finally on the characters. The action is pure elixir, the setting hypnotic and the actors a solid anchor.

There will never be another installment of this series without Diesel. He’s iconic, like Sylvester Stallone in his Rambo series: Stoic, laconic, testosterone-heavy. A smile or a grimace is all Diesel needs to convey amusement or rage. Walker makes a decent second banana. Jordana Brewster, as Dom’s sister and O’Connor’s lover, appeals to the female crowd. The rest of the ensemble cast adds their special blend of humor and urban swagger. The Rock’s inclusion in this volatile cocktail is explosive. When he and Diesel go head to head it’s like two ferocious bulls charging each other.

Alprazolam Mexico Online Stephen F. Windon’s cinematography makes Rio look oh so inviting. Ditto the pulsating rhythmic music and the endless parade of bikinis. There are scenes in a warehouse were the crew devises their plan that look like a cheap set in Burbank, but those are the only inorganic moments.

This is the right movie (action thriller), at the right time (before the onslaught of summer blockbusters). It’s in an ideal location (home of the upcoming World Cup and Olympics). The casting is perfect (new age multi-racial).

http://bandarbaju.com/tag/baju-babydoll-anak/feed Usually when you get in a fast car, you want to put on your seatbelt. In this case, leave it off and go for the ultimate thrill ride!

Buying Xanax Over The Counter In Mexico

Buying Xanax In India Site Designed by No Regret Media